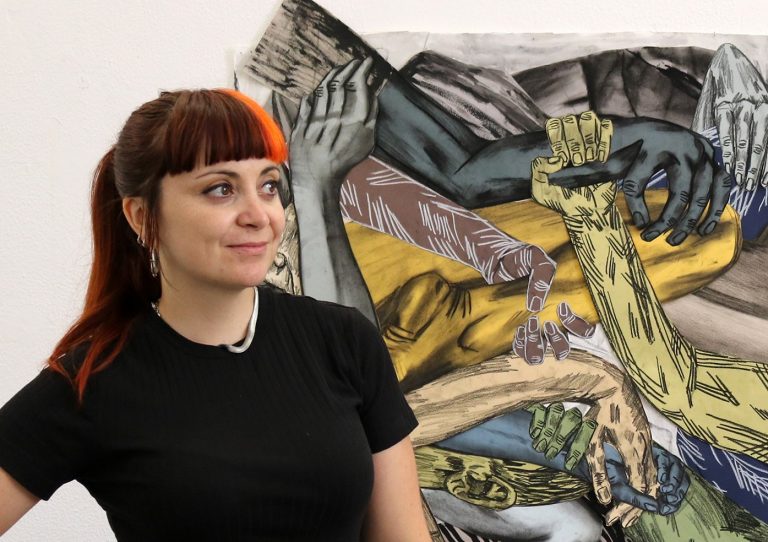 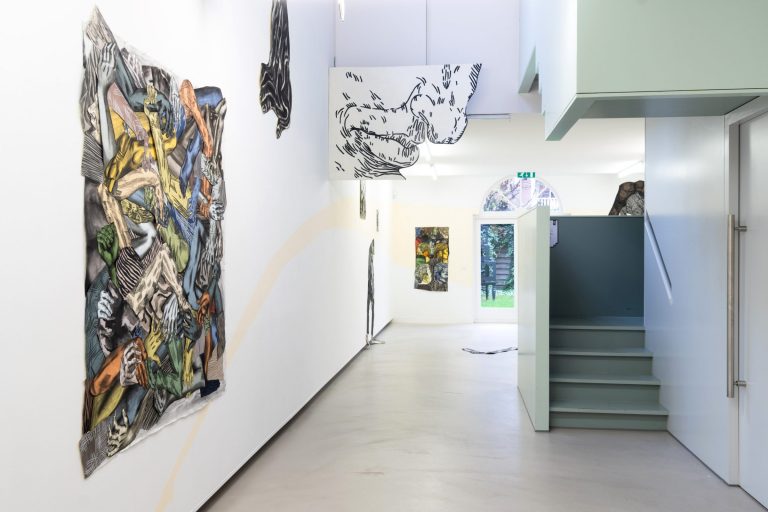 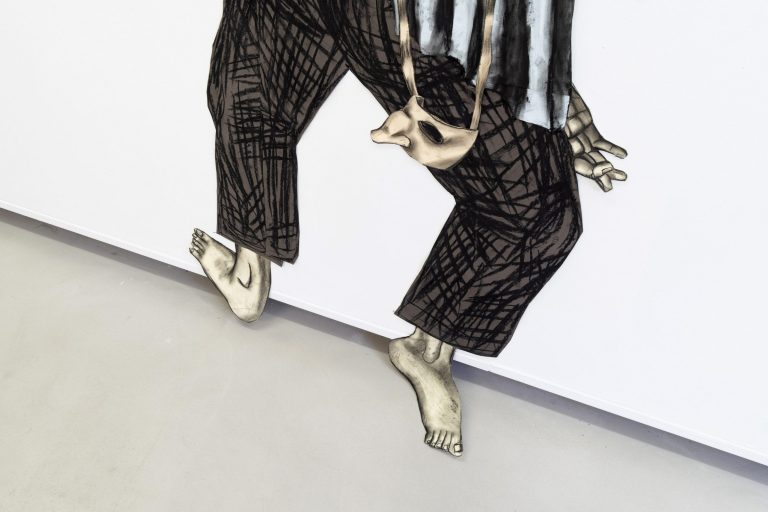 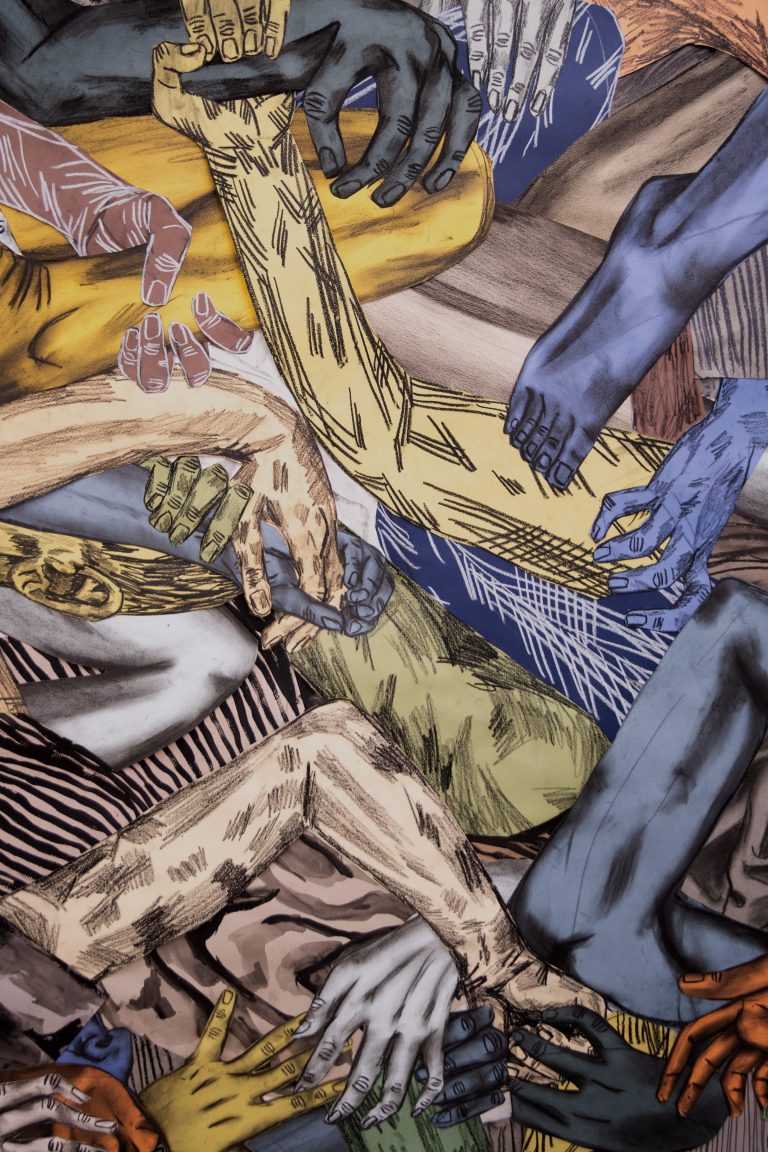 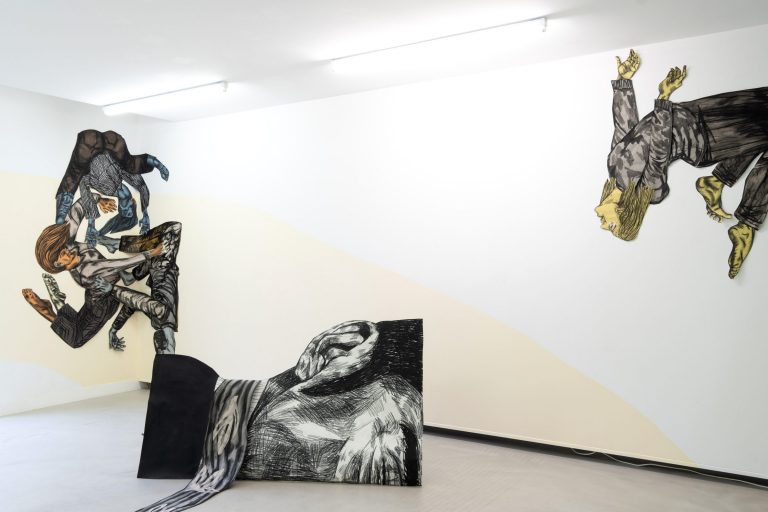 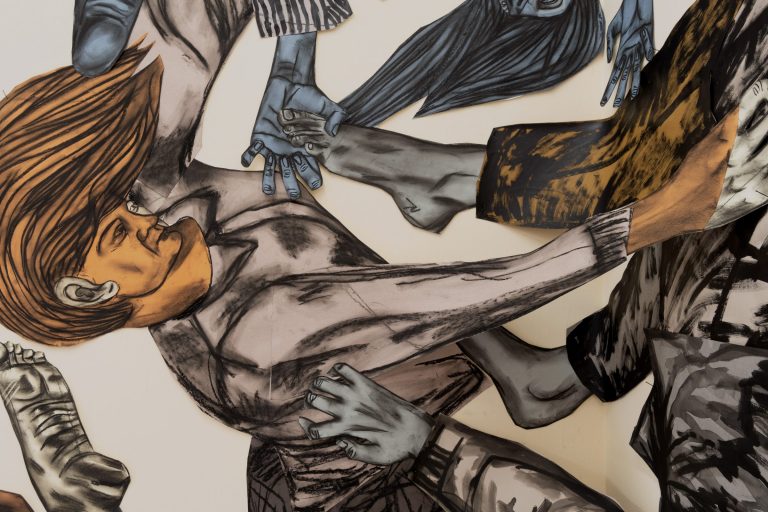 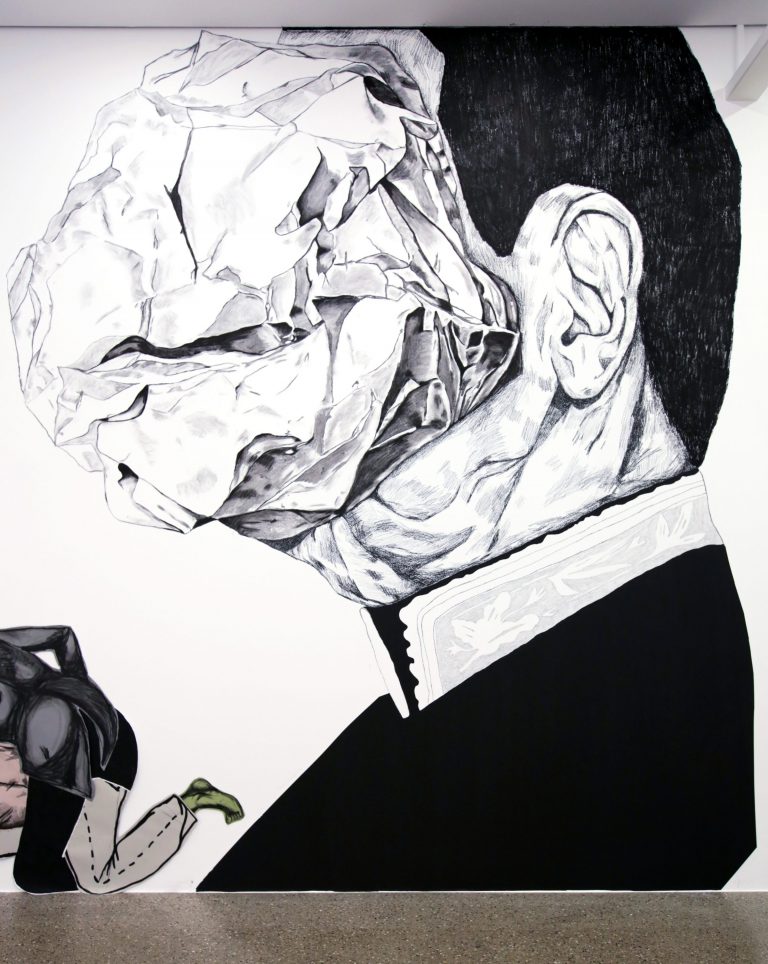 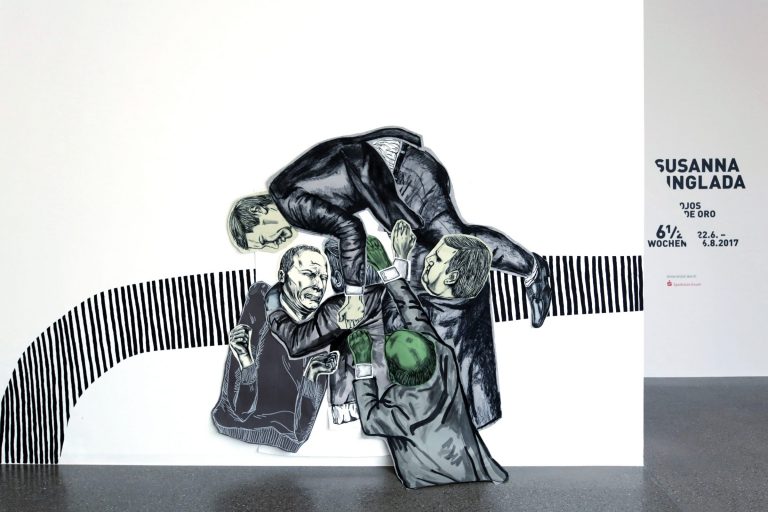 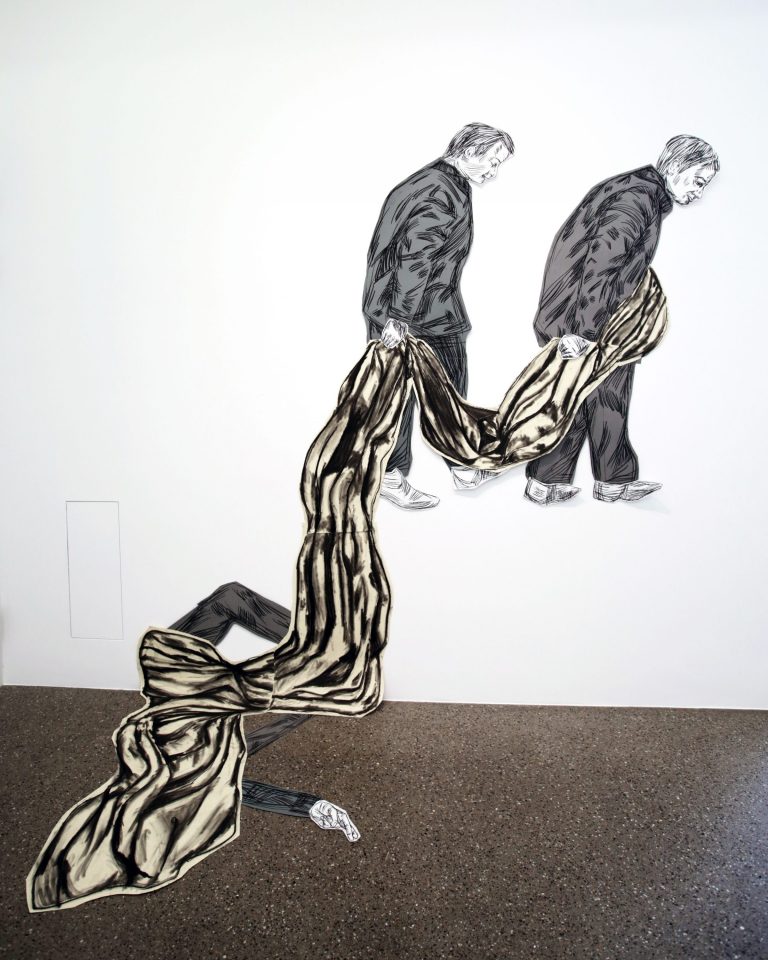 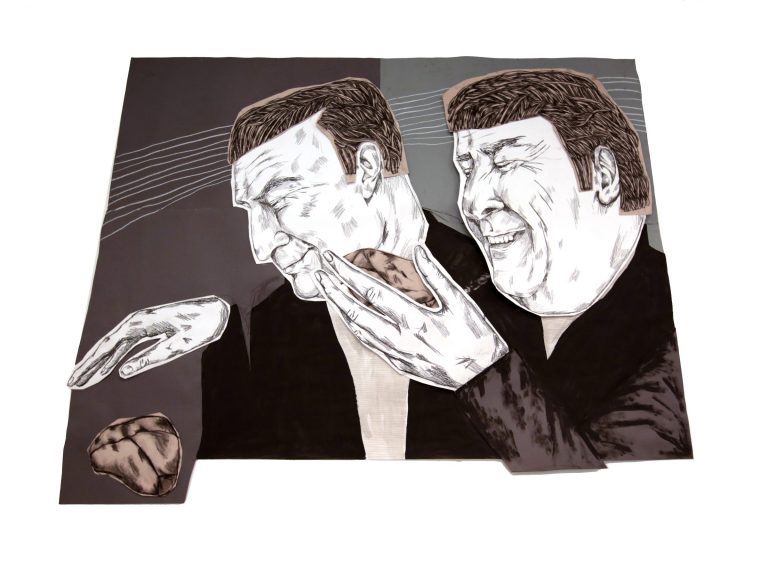 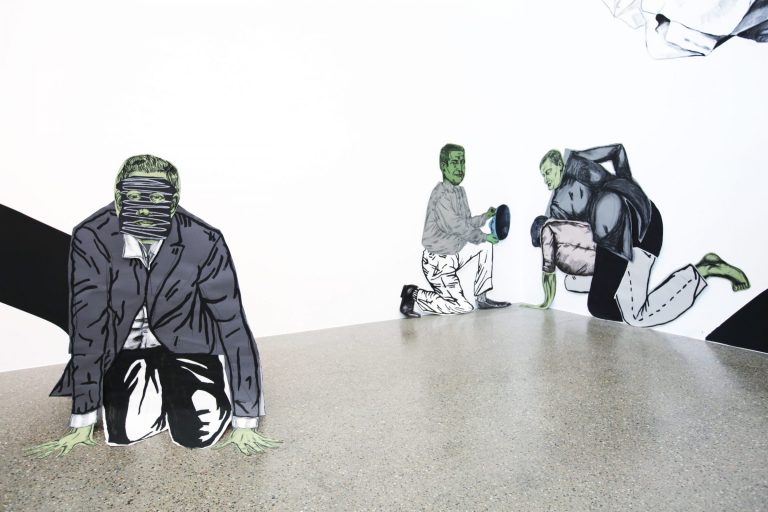 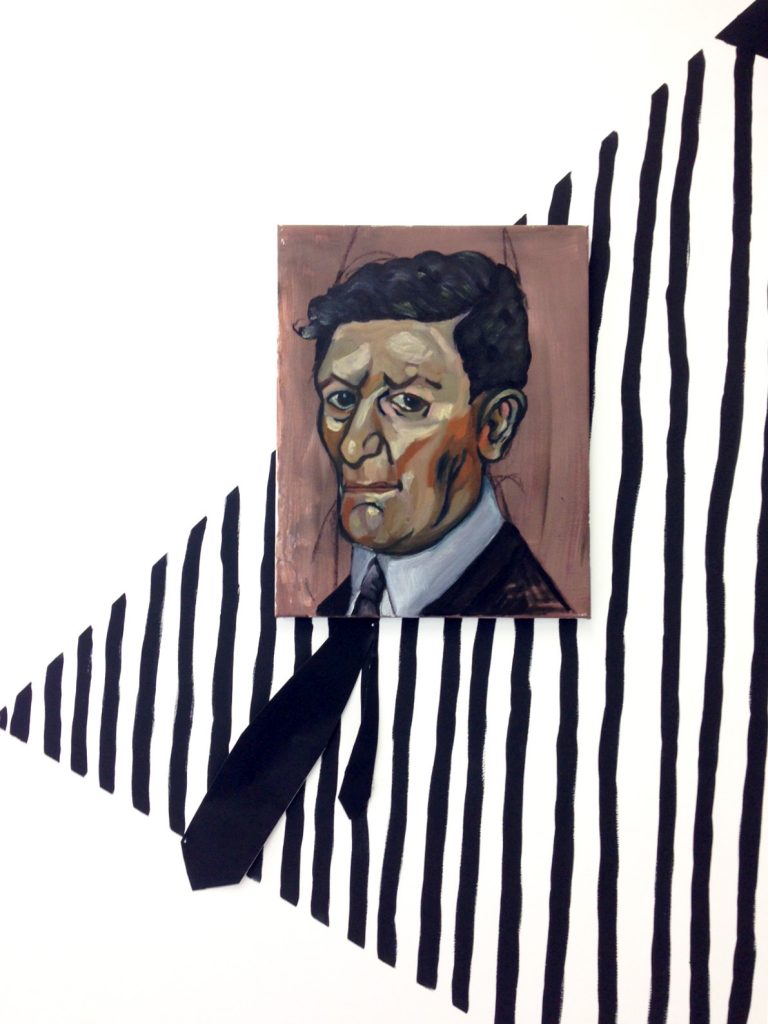 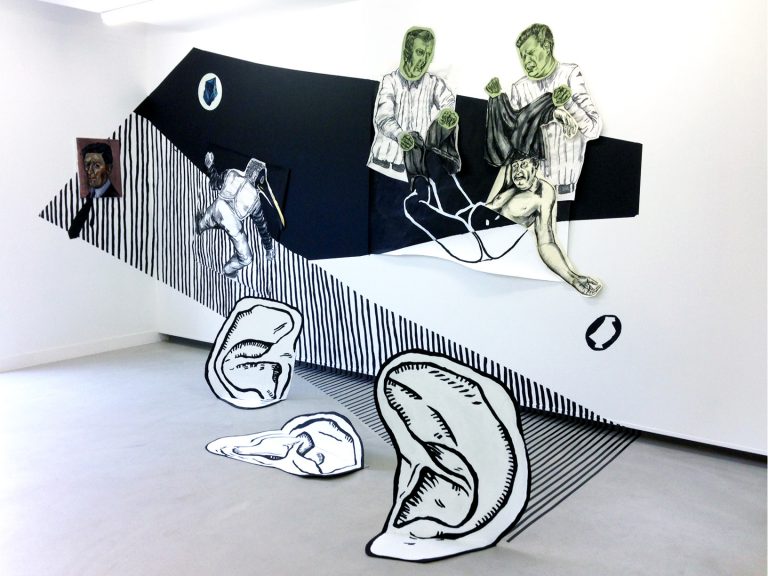 Susanna Inglada started her artistic career at the Theatre School in Barcelona, but after graduating she decided to follow a career in painting. A couple of years later, she left this technique behind and has now developed a recognizable working method on paper, embracing her background in Theatre Studies. She places her cut-out drawings in the space, hangs them from the ceiling and places them on the floor as a stage decor of a play. The human figures seem familiar and you think you are recognizing them, but they are always anonymous and exchangeable. When the visitor moves through the exhibition, he or she is confronted with physical struggles, enlarged facial expressions and strong emotions and is thus forced to experience the work physically.

Susanna works with images she collects from the Internet and from magazines and draws inspiration from literature, theatre and the news. With these elements she investigates the mechanisms of power and corruption. She creates sketches, scale models and studies with different materials before creating the characters of her play. These characters take on stereotypical roles such as that of the victim, the oppressor, the spectator, a citizen or a politician. They fight with each other, are pawns in a political game. Entanglement and masses have always been the subject of her work, but they now seem even more relevant in the current era.

Susanna Inglada studied at the La Casona Theater School in Barcelona, obtained a BFA at the University of Barcelona, an MFA at the Frank Mohr Institute in Groningen, a postgraduate degree at HISK in Ghent and is currently pursuing the Young Grunn Artist III Program from NP3 and the Groninger Museum. She has exhibited in various group and solo exhibitions in the Czech Republic, Belgium, Italy, Spain, France, the United States, Mexico and the Netherlands.

Her solo exhibitions included: “The Scheffer” at the Dordrechts Museum in 2019, “6½ Weeks: Susanna Inglada – Ojos de Oro” at Museum Folkwang in 2017 in Essen and “Strange Habits” at the 2016 Kunsthal in Rotterdam. She participated in the group exhibitions “The Paper Biennale” in Museum Rijswijk in 2020, “Generaciones 2019” at La Casa Encendida in Madrid and “The Line Up” in 2018 in Centraal Museum Utrecht.

Susanna’s work is included in the collections of Academia de Espanya in Rome, Erasmus University in Rotterdam, the NOG Collection (Stedelijk Museum Schiedam), the Dordrechts Museum, Museum Folkwang in Essen, the City Archives in Amsterdam, Fundacion Monte in Madrid and Fundacio Guash County in Barcelona. Her main representative is gallery Maurits van de Laar. The collaboration between Susanna and Galerie Bart dates back to 2013.

Face in a crowd