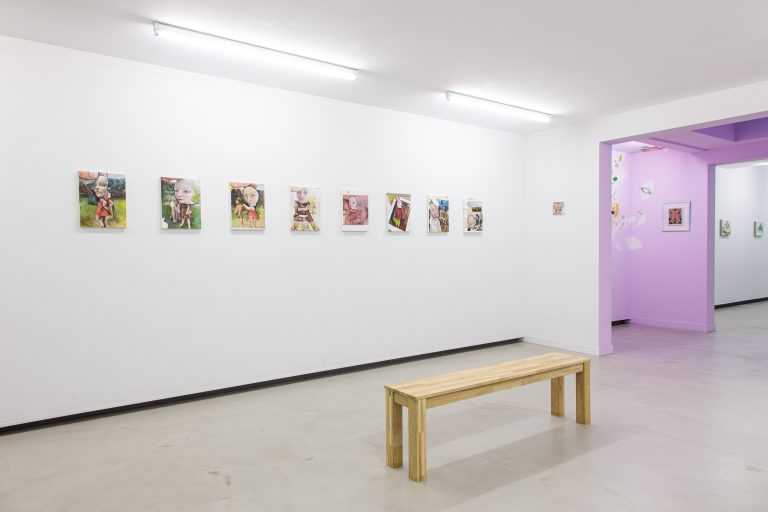 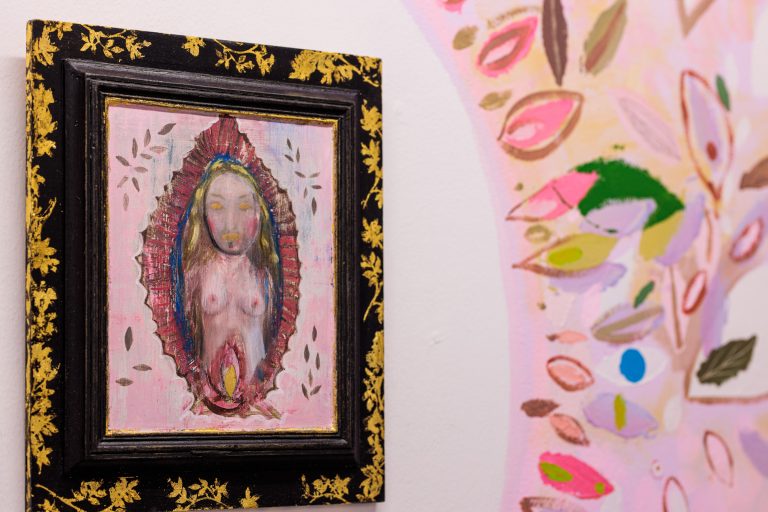 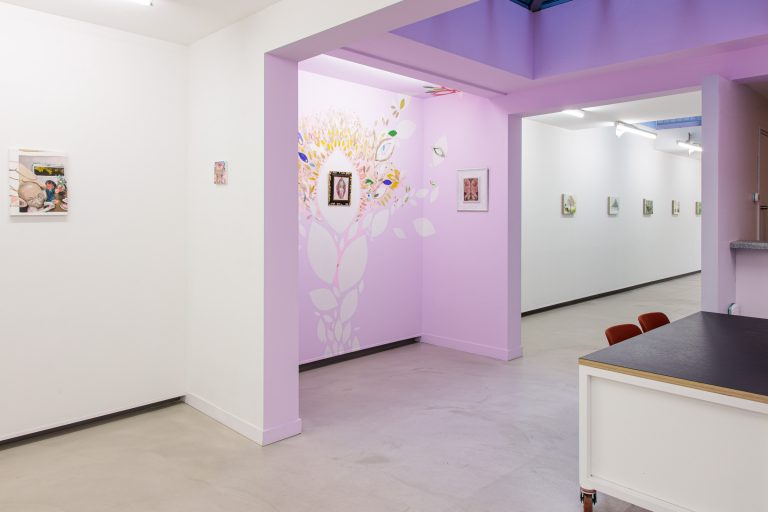 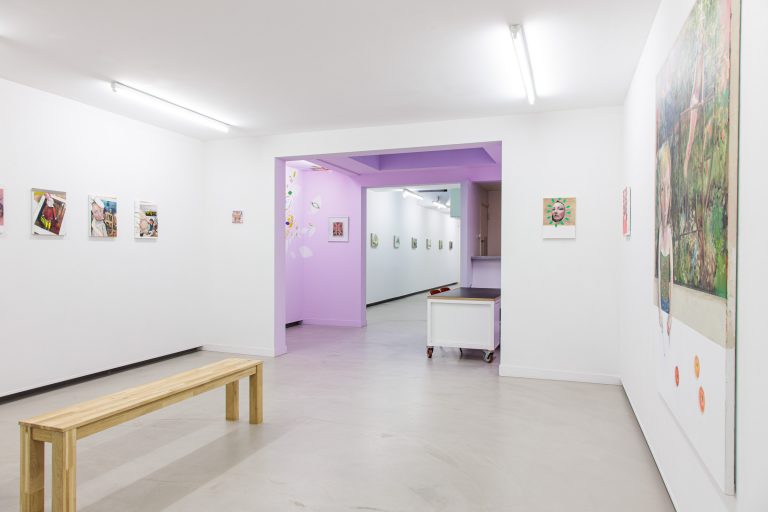 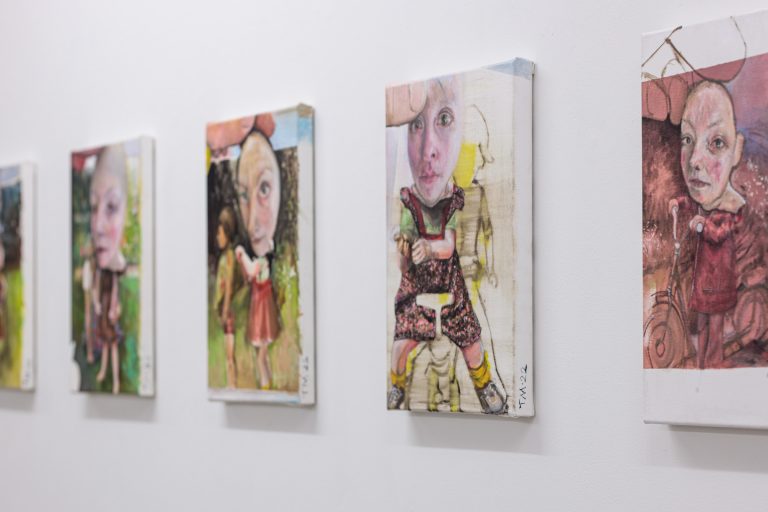 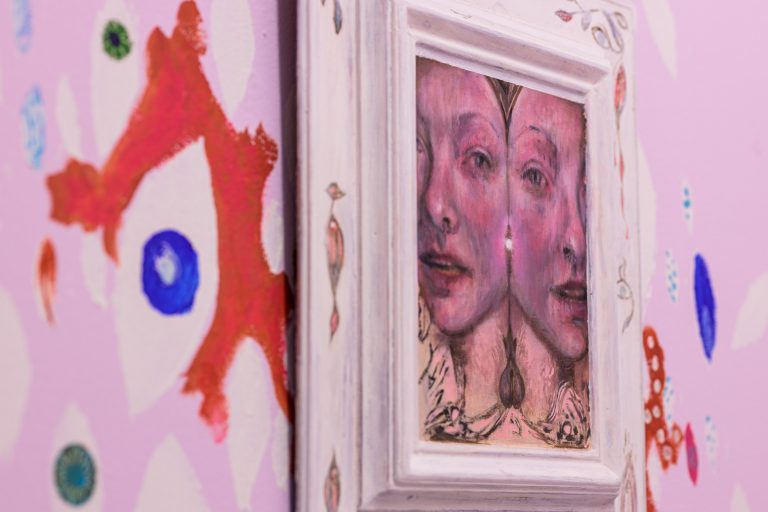 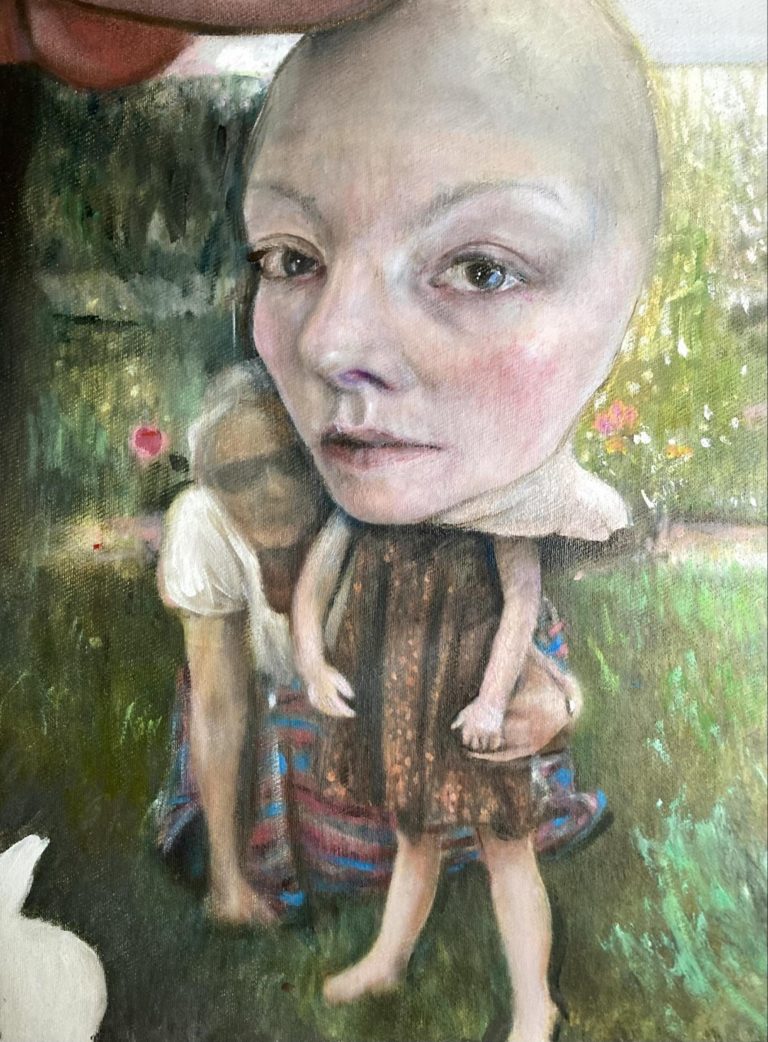 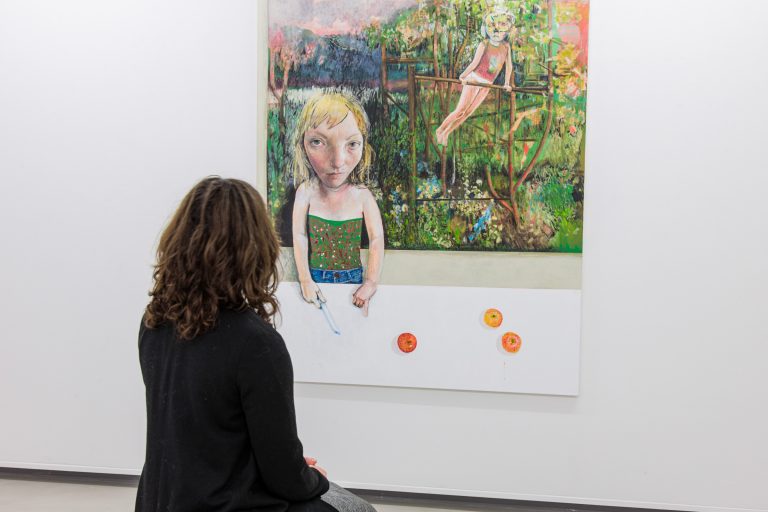 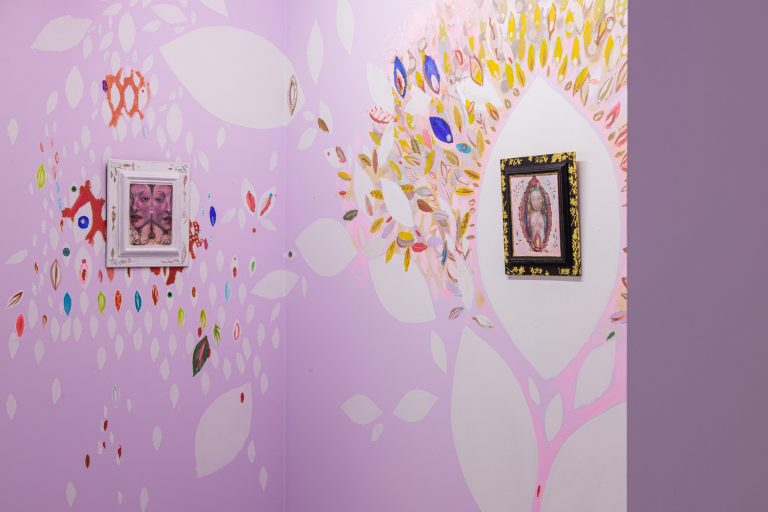 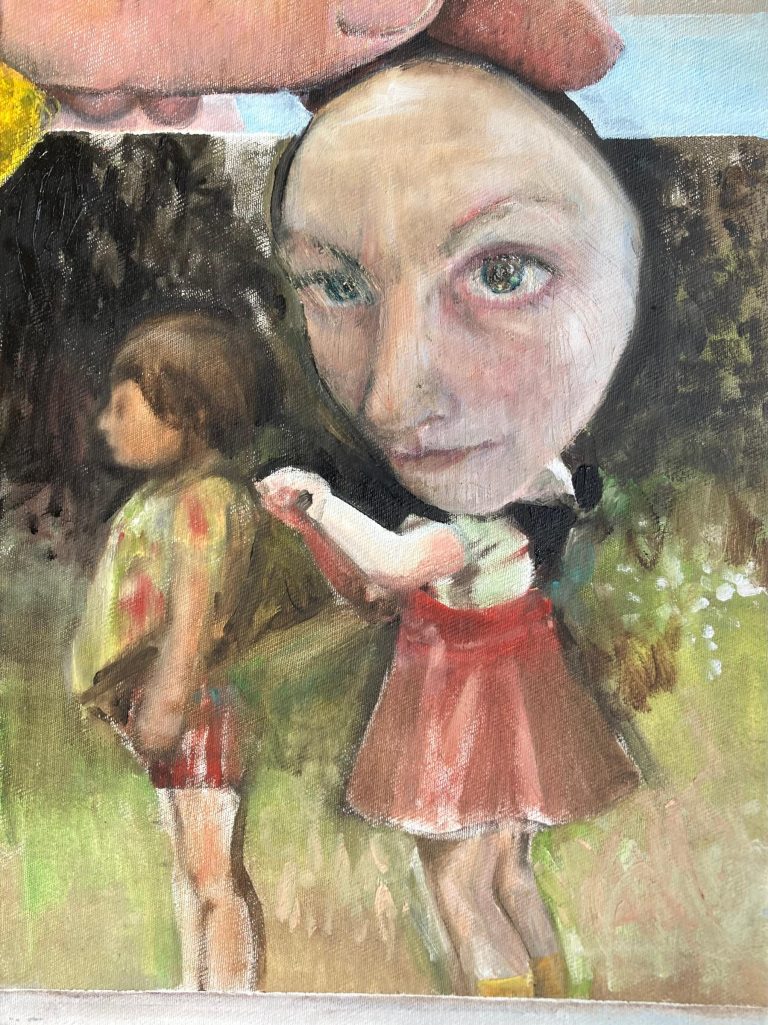 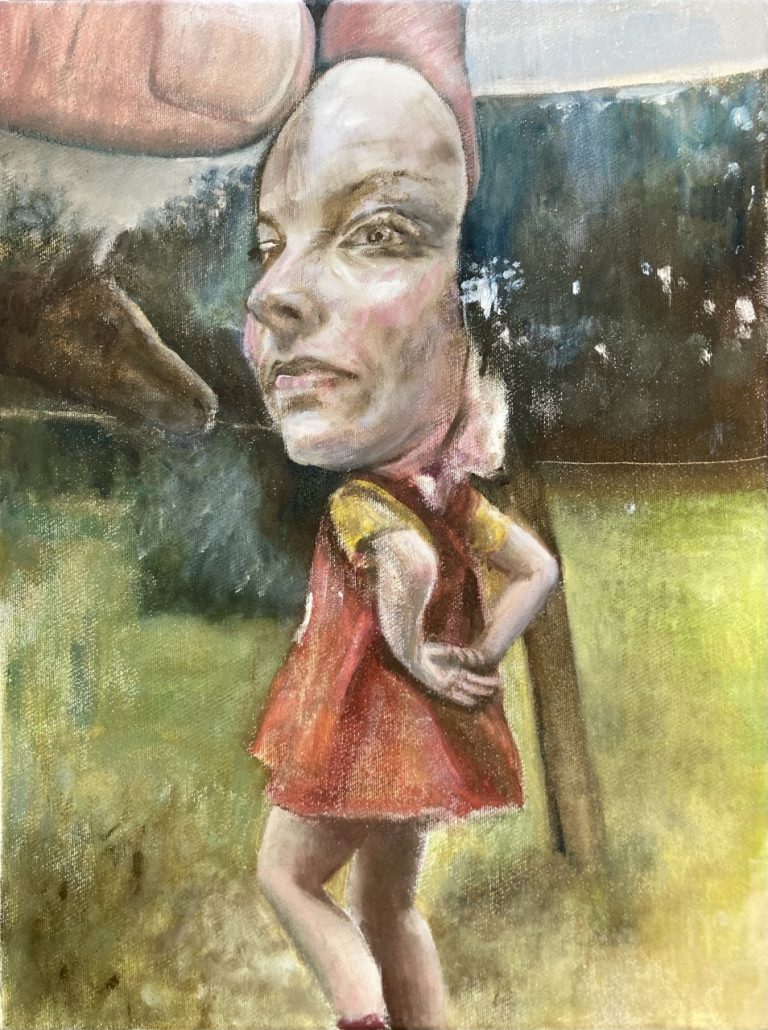 Gallery Bart will proudly open Bear With Me, Tamara Muller’s fifth solo exhibition, on Saturday 14 January 2023. As an artist, Muller has spent the past year and a half delving more deeply: the needs to break new ground and find a new visual language led her to experiment with different media, while maintaining the commonality of use of the self-portrait. The outcome of this exploration is twenty small paintings and a series of short films, with trauma and healing as underlying theme.

Muller’s first major solo exhibition at the Drents Museum closed in September 2021. The following month an exhibition on the work and life of Frida Kahlo, Viva la Frida, opened. During that exhibition, Muller spent a short period working as artist in residence at Studio DM, the museum’s residency programme. Muller visited the exhibition about the artist almost daily. These encounters with Kahlo’s work were an important influence in the creative process that followed.

Remarkable similarities can be found between the work of Kahlo and Muller. Kahlo’s famous quote ‘I paint self-portraits because I am so often alone, because I am the person I know best,’ could have been Muller’s. Muller uses her own face to give form to different characters, emotions and mindsets. As she explains in her own words, ‘…by placing my face on each figure, I’m no longer an individual and am, in fact, painting everyone or playing with the idea that I can be or could have been anyone and am no different from anyone else. By using my own face in the scene I construct, I don’t have to answer to anyone.’*

The subjects physical and mental suffering are the motif in many of Kahlo’s paintings. These themes can also be recognised throughout Muller’s oeuvre. She has often shrouded this, allowing it little more than a menacing background presence; one that slowly seeps in through the floral wallpaper. Now it is a central theme in her work. However, she not only visualises suffering but also takes us along on her journey of healing.

From February to July 2022, Muller received weekly EMDR therapy** to help her process remnants of various traumas from her past. While others might have written about this experience, Muller felt the need to express her emotions and realisations as images after each session.

For this, she chose film as her medium. Using footage presented by the Re-face app (an app that superimposes your own face over that of movie stars), she intuitively edited together her reflections. In this way, Muller created a series of ten short films, which make up her ‘SelfHelp – ArtMovie – Lessons’.

After completing this therapy, Muller began working on a series of small paintings on canvas. These incorporate photos from Muller’s childhood. Whereas in most cases photographic selfies formed the starting point for the later painting, now a small clay bust has also been used as new reference material. In addition, like Kahlo, Muller was inspired by two religious artefacts: the ex-voto and the altarpiece, both of which are referred to in Spanish as retablos. On small canvases, she painted references to traumatic events from the past, which she combined with images of saints. In the exhibition Muller transforms an entire niche into an ‘altarpiece’, in which small panels form a triptych.

Bear With Me is not a completed chapter; instead it should be seen as a starting point. By expanding her repertoire to include new art forms, Muller is opening up more than ever before. With the title of her exhibition she seems to be asking us to be patient with her, as if she is burdening us with something. But by sharing her state of mind with us, she shows us that embracing one’s vulnerability takes an awful lot of courage and is therefore deserving of respect.

You are most welcome to join us for the festive opening of Bear With Me. At 17:00 we’ll serve drinks and bites.
The exhibition will be officially opened at 17:00 with a recitation by dramaturge Mart-Jan Zegers.

Bear With me opens together with solo exhibition REWIND by Jeppe Lauge.