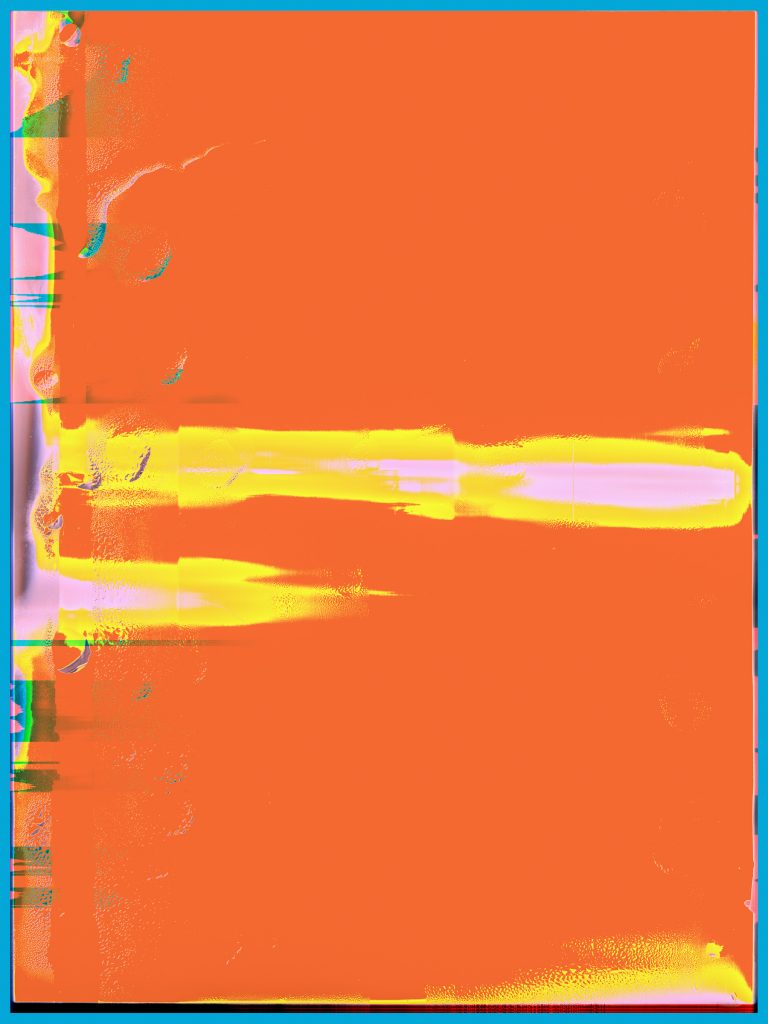 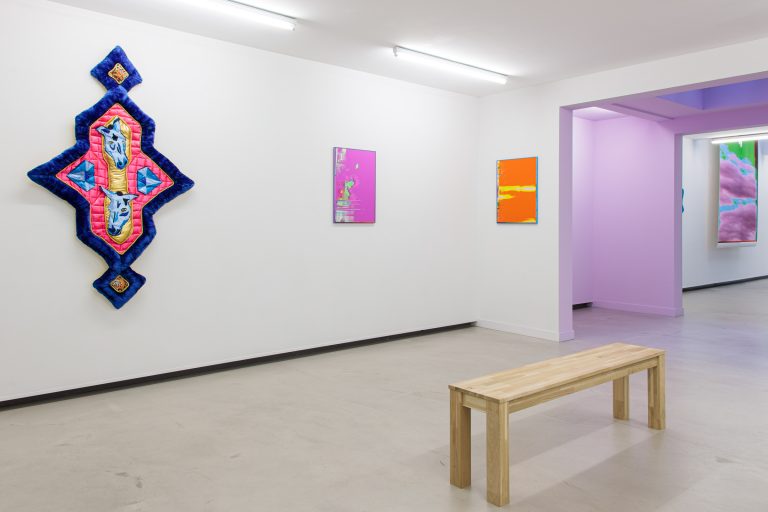 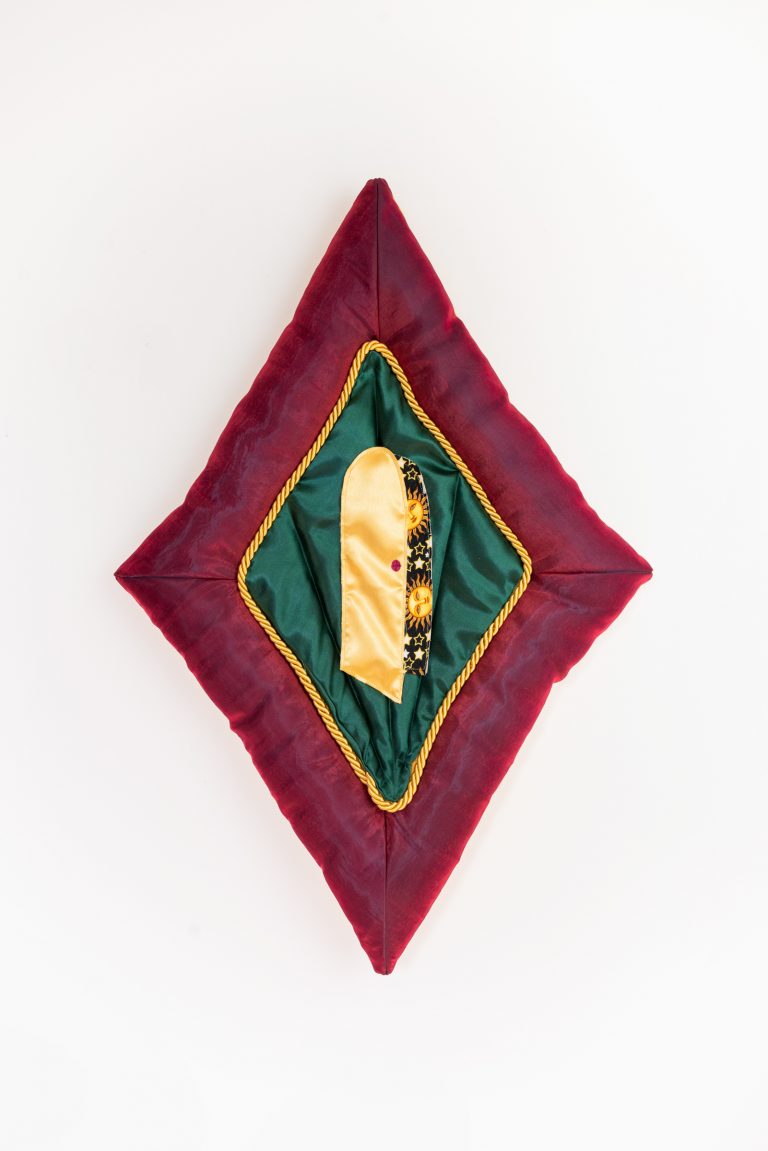 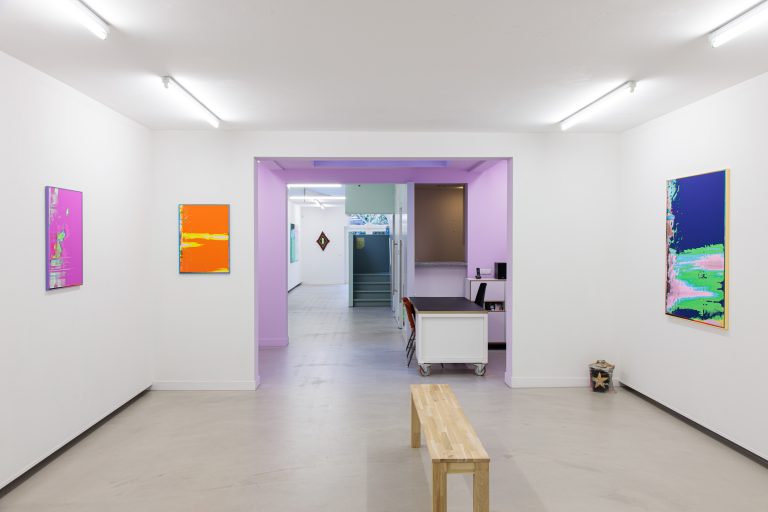 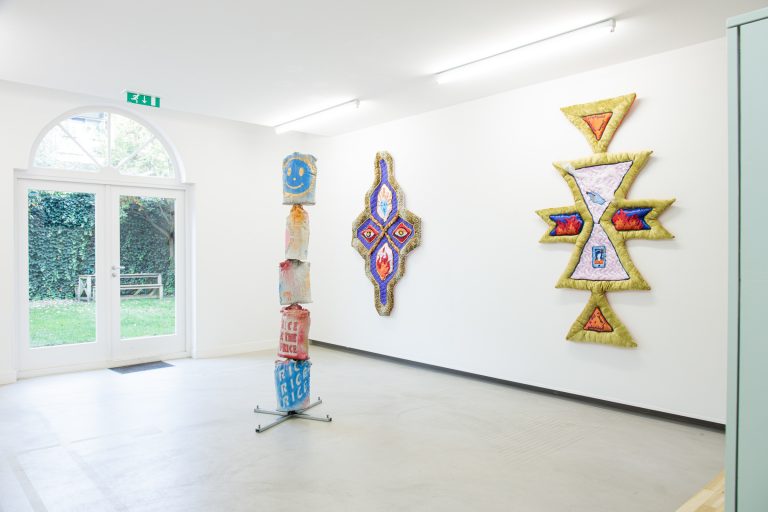 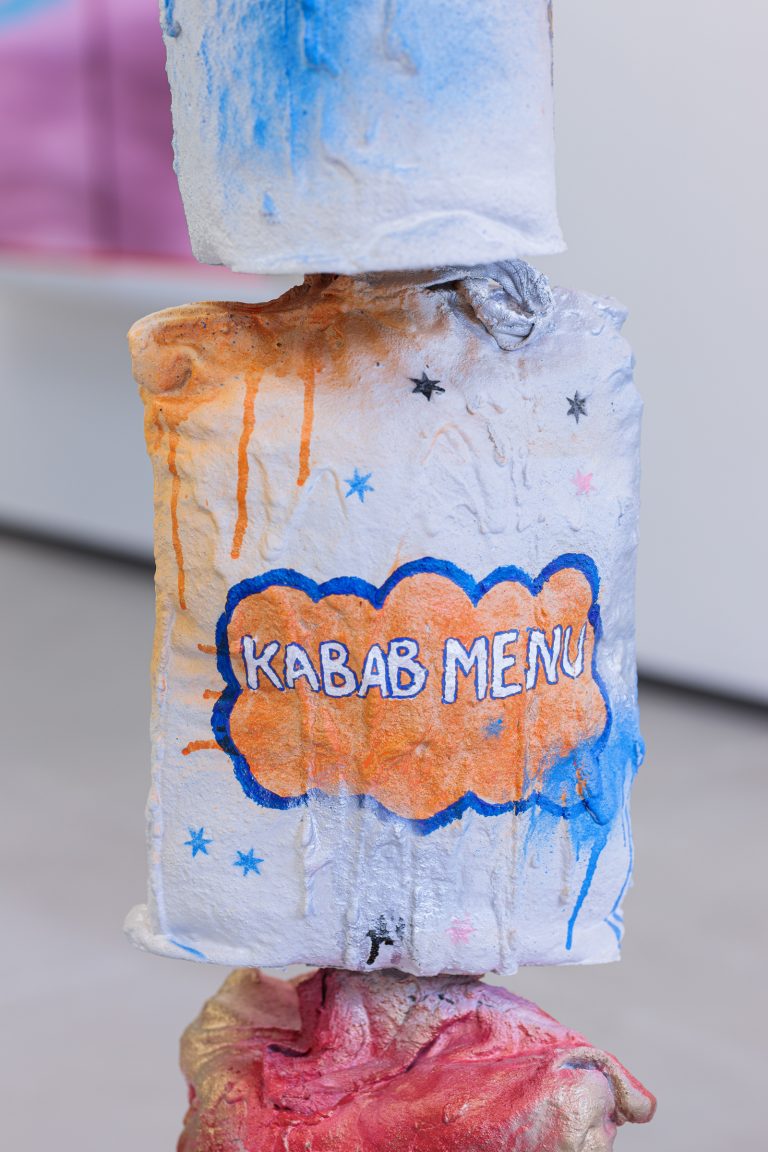 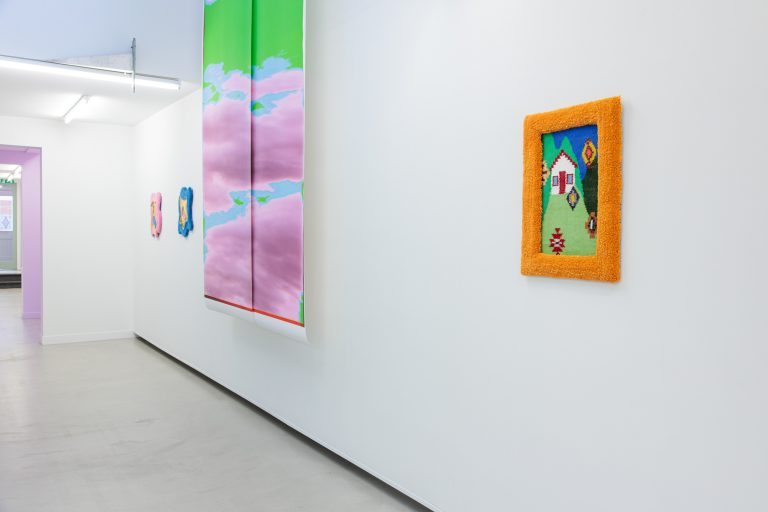 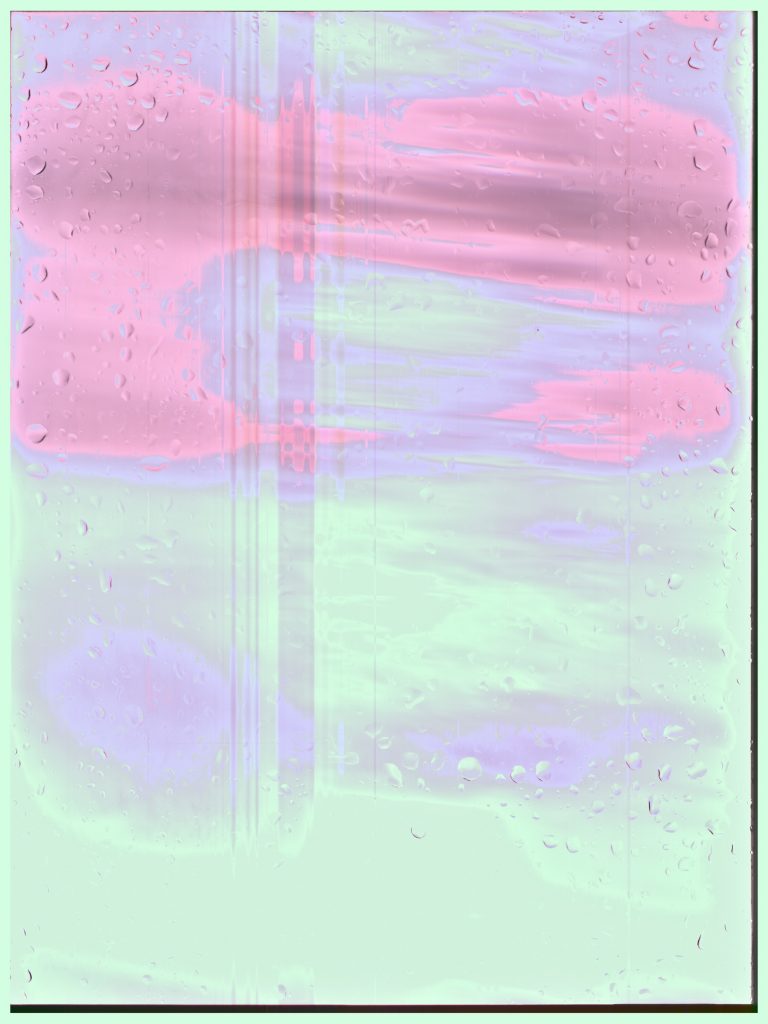 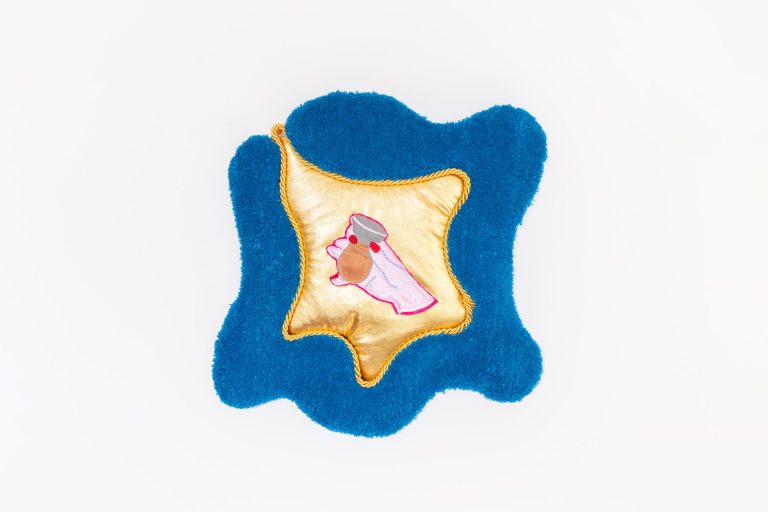 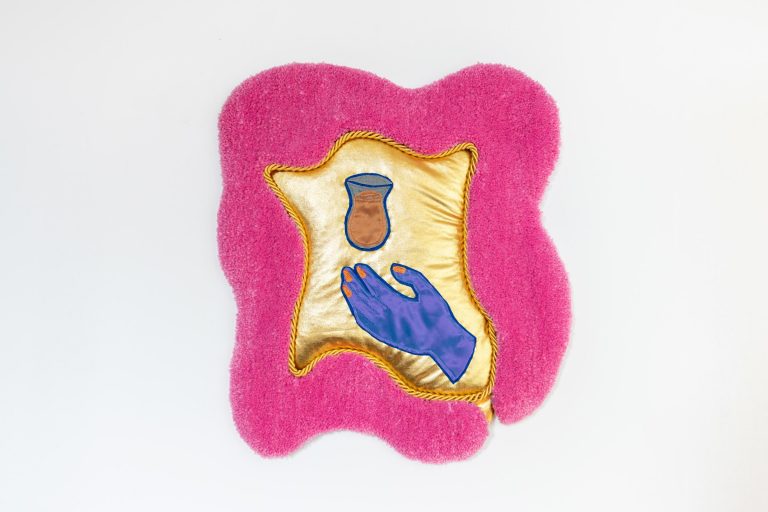 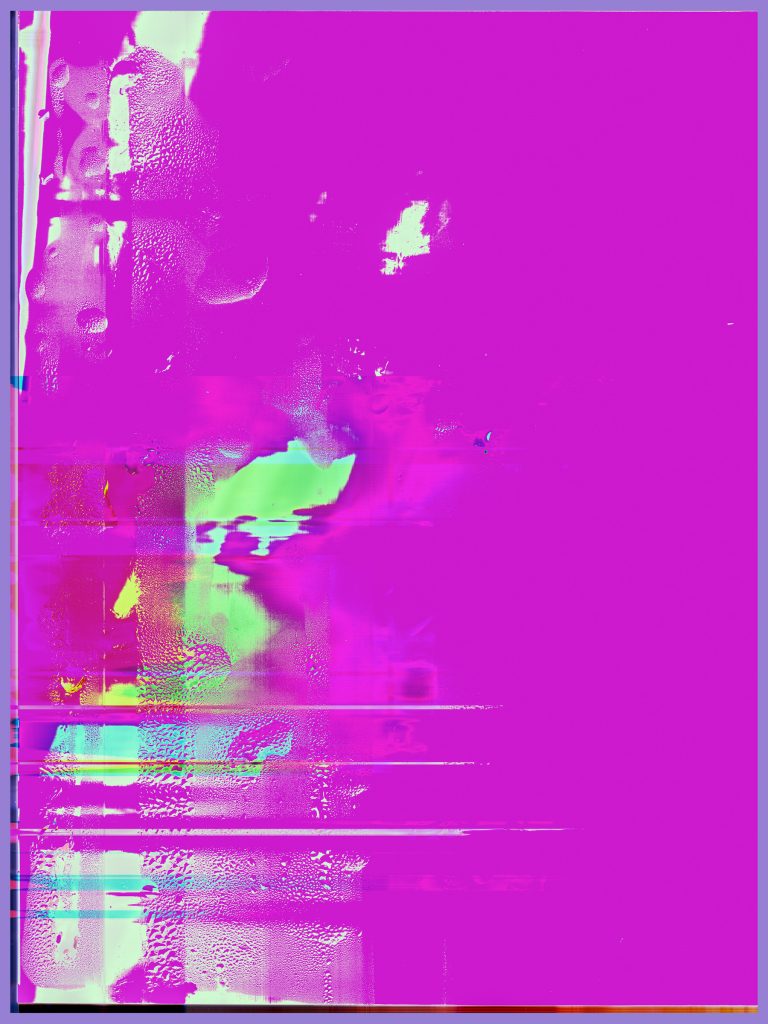 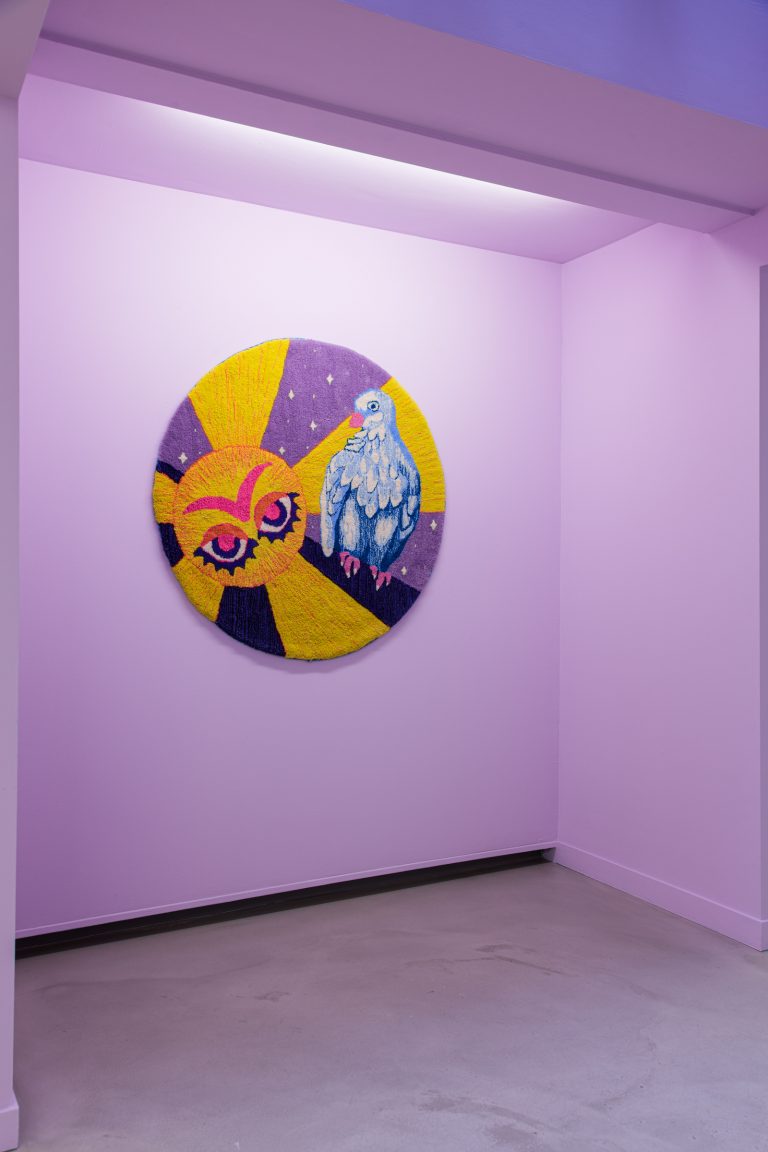 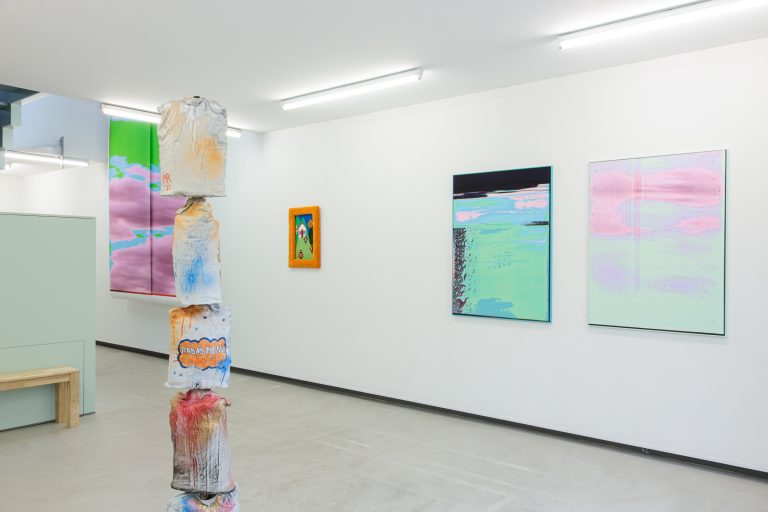 Galerie Bart is proud to present Between Here and There, a duo exhibition featuring the works of Hemaseh Manawi Rad and Jannemarein Renout. An exhibition that deals with being in the in-between.

In her work, Hemaseh tries to reconcile her Persian roots and her current Western surroundings, despite the fact that they don’t always mesh. This friction inspires her to create textile works that do justice to both cultures. Her work occupies the boundary between Middle Eastern and Western themes, such as family traditions and memories from her childhood. As such, her tapestries can be ‘read’ as diary excerpts. Using her own symbolic imagery, Hemaseh creates work in which recognition and mystery go hand in hand.

Jannemarein, in her work, tries to visualise time. Daylight and weather conditions are her medium. Her instruments are flatbed scanners, which she places outdoors. For nineteen minutes the scanner registers the changes in its environment and depicts them as an image. Jannemarein creates various series in this way, which differ through the use of different types of scanners. Each scanner creates its own unique image.

During Between Here and There her RAIN series will be shown. While making this series, Jannemarein placed the scanners in the rain. As a result of the rain, which also made its way inside the machine, colourful images were created. Inspired by Carlo Rovelli, Jannemarein seeks the imagery of change, of happening in time, of being continuously in motion. After all, time does not allow itself to be captured. Just as we, ourselves, are constantly changing. That which is ‘real’ in the ‘now’ does not exist, it is just an event between here and there.

Currently you can admire the artworks by Hemaseh Manawi Rad and Jannemarein Renout at our gallery. Hemaseh tries to unite her Persian and Western cultural background with her work. Her two artworks, Understanding I and Understanding II are about what drinking tea means to her. Hemaseh’s parents speak poor Dutch and she speaks very poor Farsi. So communication wasn’t always easy. This makes drinking tea a special practice to Hemaseh and her family. The artworks are about non-verbal communication and drinking tea together. Her story beautifully connects to the tea ceremony, and we’d like to share this experience with you!

Join our event and learn about what the practice of tea drinking means to artist Hemaseh followed by a tea ceremony! Our host Safiya and artist Hemaseh will start this event with a conversation about her artwork.

The tea ceremony will be lead by a tea master from Moychay Amsterdam Tea Culture Club. You will be guided through the gongfu tea ceremony or kung fu tea ceremony (Chinese: 工夫茶 or 功夫茶). This is a kind of Chinese tea ceremony, involving the ritual preparation and presentation of tea. The term literally means “making tea with skill”. The Tea Guides of Moychay are there to provide you with the best experience, answer all of your questions and advise you about their teas and teaware.

The tea ceremony is fully booked!

You are most welcome to join us for the festive opening of Between Here and There. We will serve drinks and bites to celebrate!

Horses Dream of Leaving the Circus

Riches to Rags / Rags to Riches