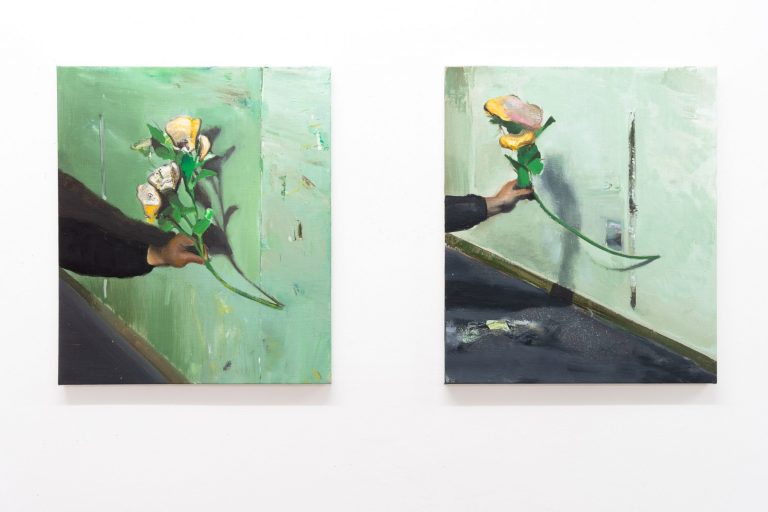 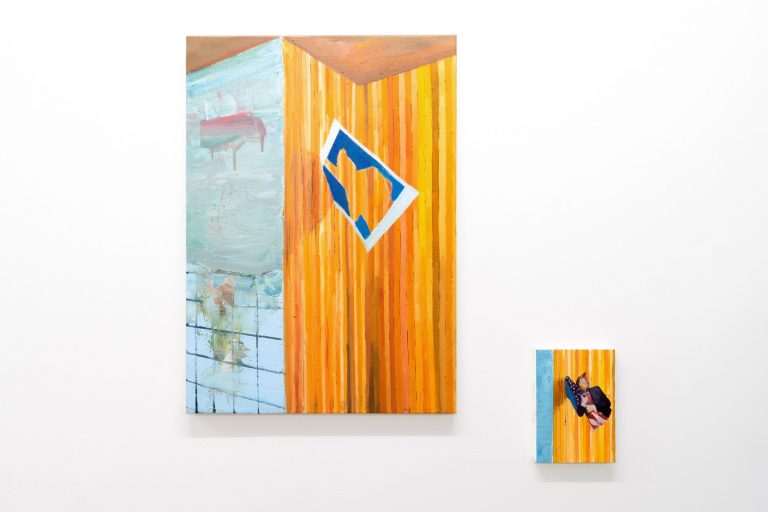 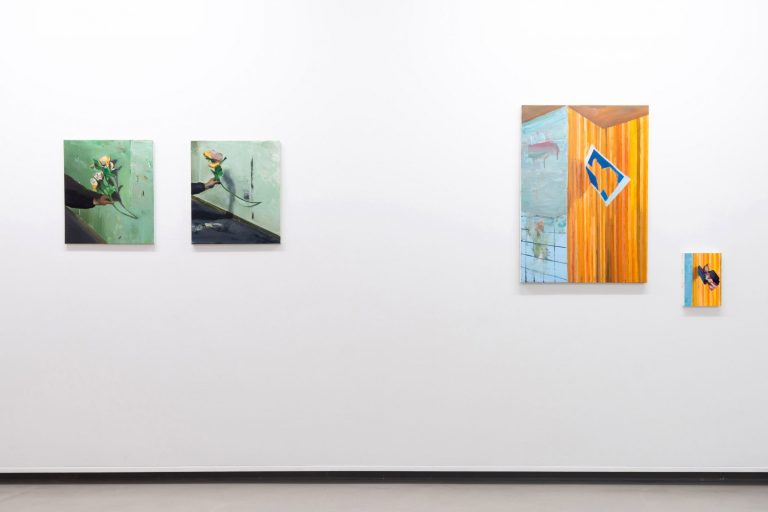 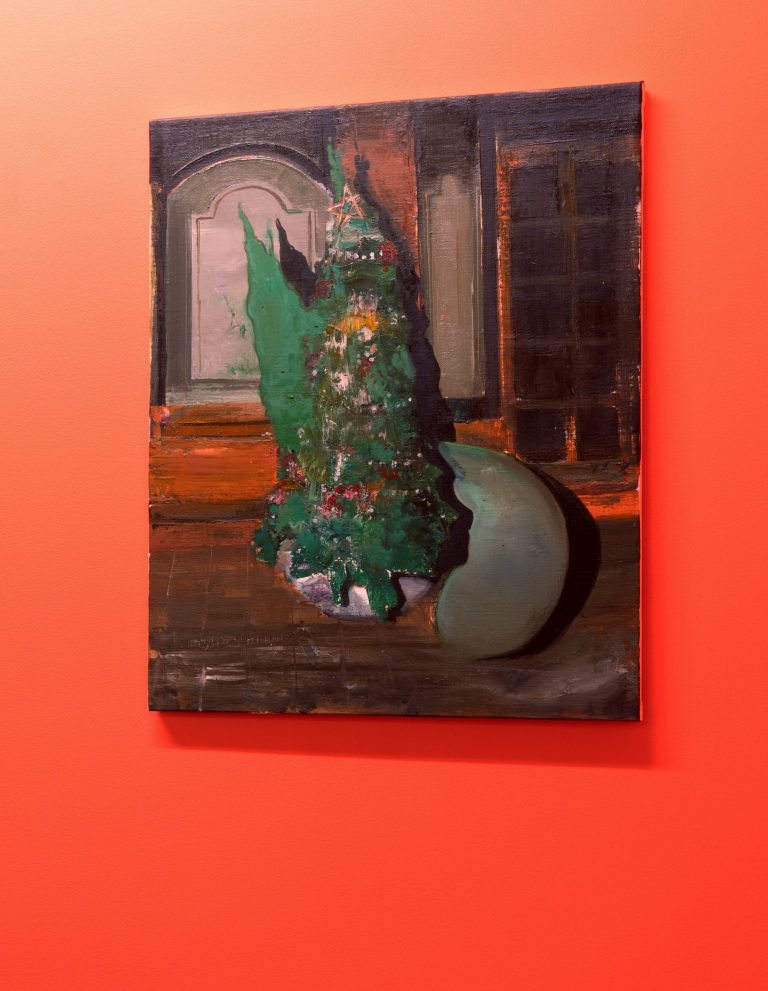 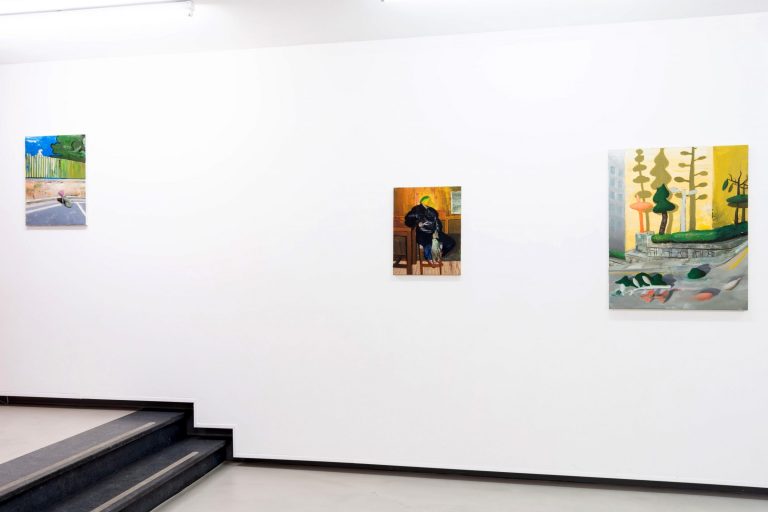 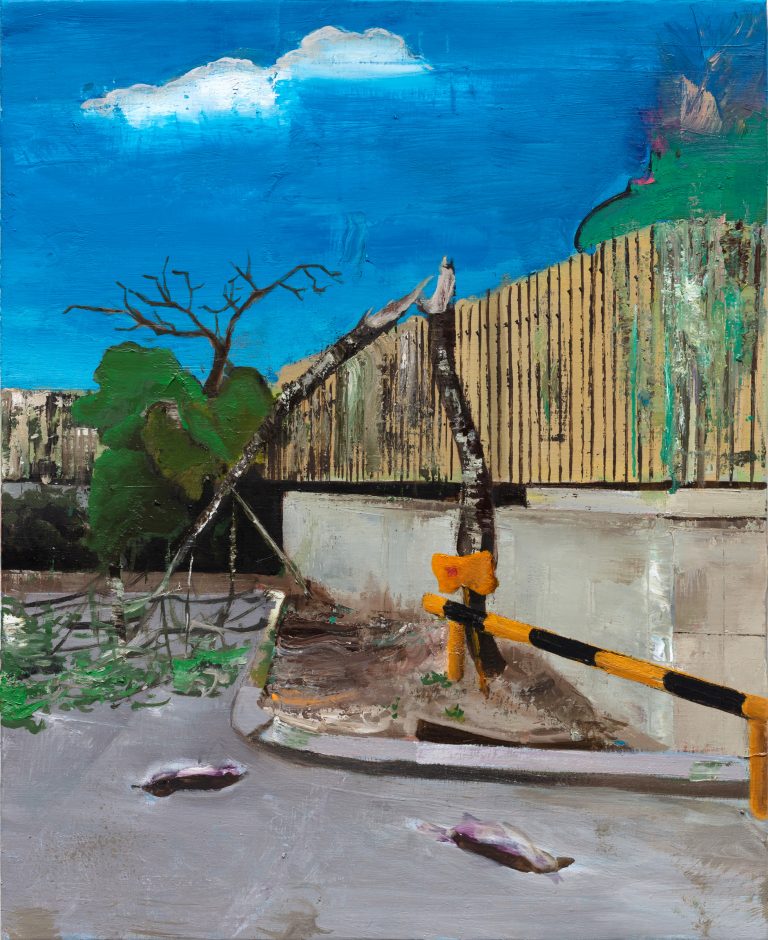 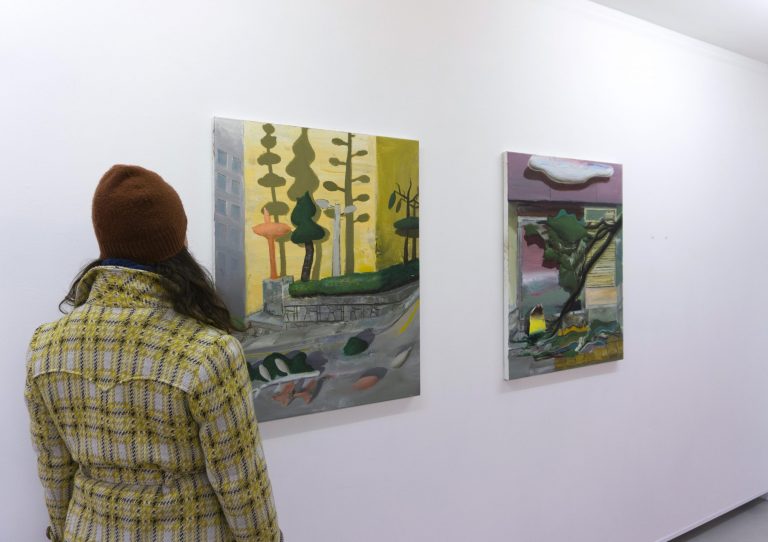 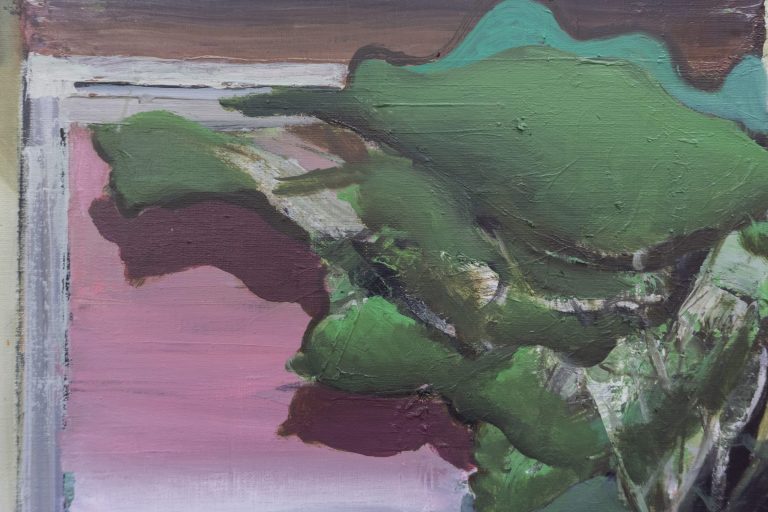 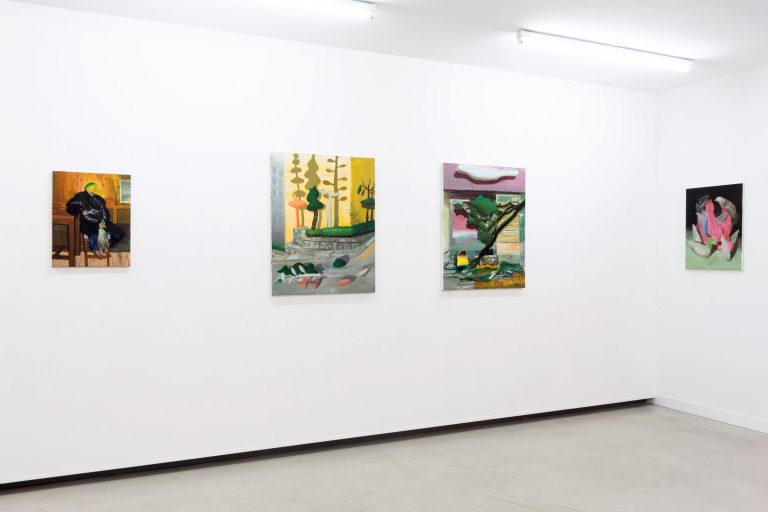 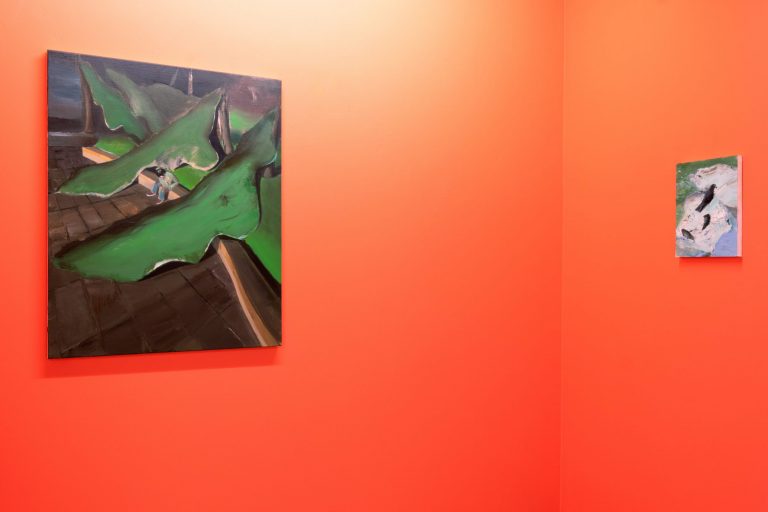 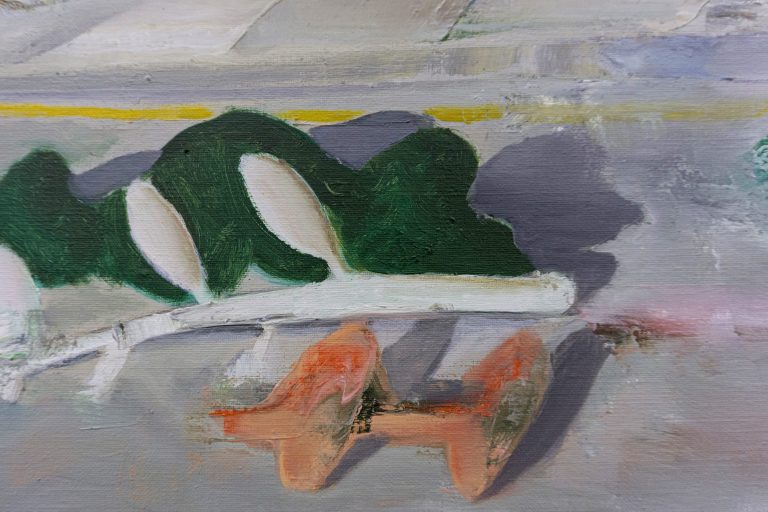 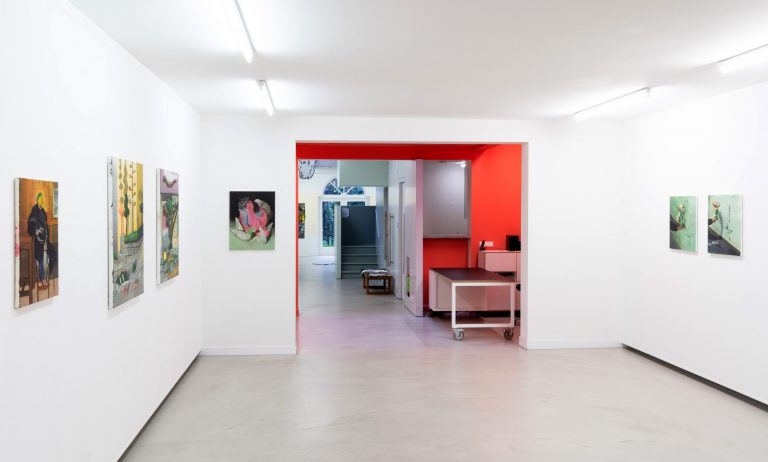 Two dogs guardedly eye each other from a distance. A forlorn Christmas tree lies on a deserted street, months after the holidays. What with the changes in the streetscape this year, the interests of Jisan Ahn have also shifted. His newest paintings reflect the situation in which we currently find ourselves throughout the world. Despite these dark times, his work has become more colourful, while what previously took place indoors now occurs in a more landscape-like setting – one with a limited range, however, situated in the nearby urban environment: ‘I cautiously open a window or a door.’

What awaits us when the storm dies down? Chaos, from which people take shelter underground, in a metro station. Damage, as we can see by a tree whose broken branches are lying in front of a store window or a bird that has lost its wings. However, decay does not exclude beauty; it even offers room for an aesthetic we previously took for granted. Says Jisan, ‘What has been damaged can still – or even because of that – shine. That’s also a part of life. After a period of being housebound, it’s suddenly special to eat an ice cream outdoors. Little moments of happiness like that are a new form of romanticism.’

• More about Jisan Ahn.
• Everyday: After the storm is shown together with solo exhibition Crowds by Susanna Inglada.

Thursday, 26.11.20 – Sunday 29.11.20 • Amsterdam Art Gallery Weekend
The first Amsterdam Art Gallery Weekend brings together 27 Amsterdam based contemporary art galleries and 4 art institutions. Together they will provide you with a broad overview of Amsterdam’s rich contemporary arts scene and a chance to visit solo and group exhibitions, artist talks, performances, lectures and much more throughout the city. The programme might be overwhelming, therefore Amsterdam Art have set up an InfoDesk at Capital C, Weesperplein 4B. Find all the information you need at our InfoDesk and their website.

Thursday, 26.11.20: 17.00 / 20.00 • Official exhibition opening
Time subject to change. You are welcome to join us for the opening of ‘Everyday’, which will happen together with the opening of ‘Crowds’ by Susanna Inglada.

• Following government regulations due to the COVID-19 virus, reservations to enter the gallery are NOT required, but the gallery will allow a maximum of 12 visitors inside at the same time. Please wear a face mask when entering the gallery. We are also taking the other necessary precautions for hygiene. Please remain at a safe distance of 1.5 meters to others, thank you!

The dead of night, a tree is broken

The sunny day, a tree is broken

A boy goes behind the cloud

Where is my bird?