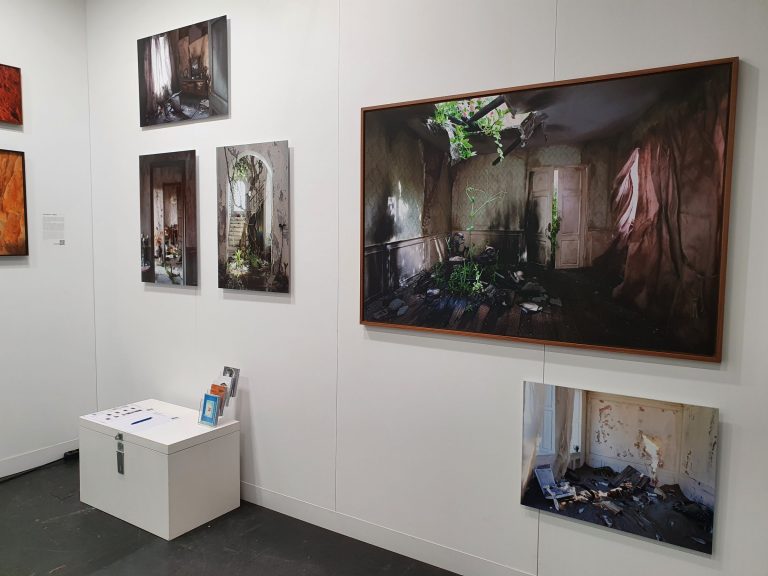 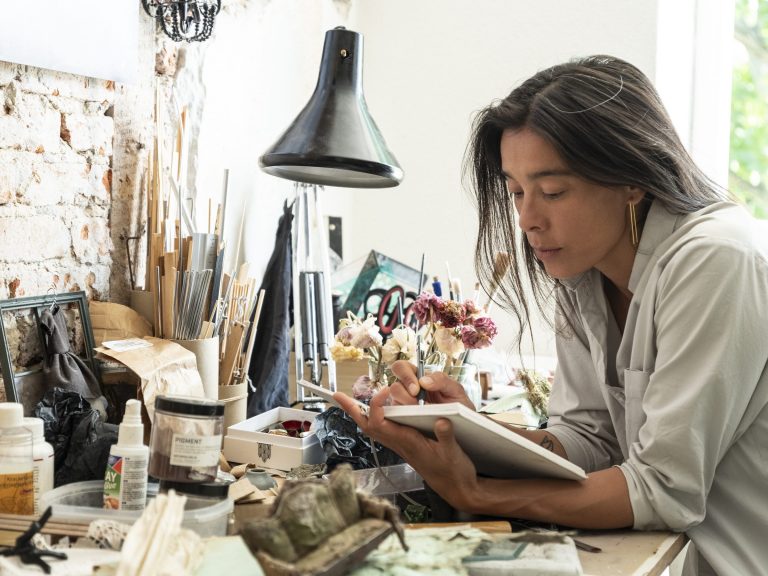 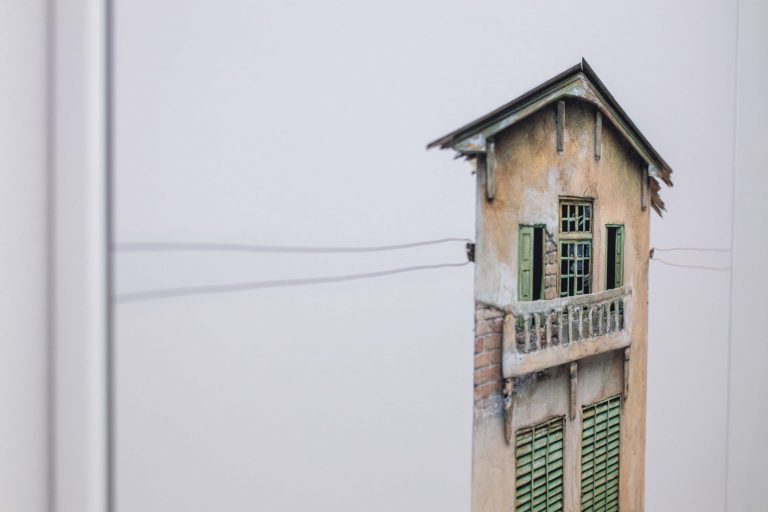 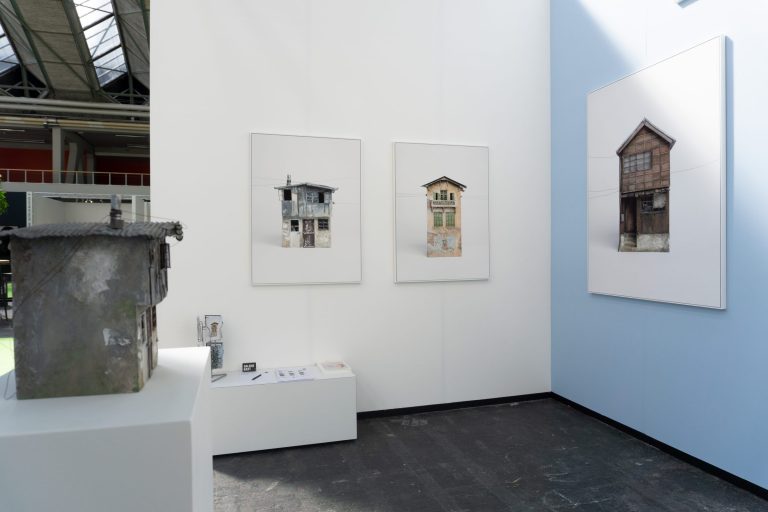 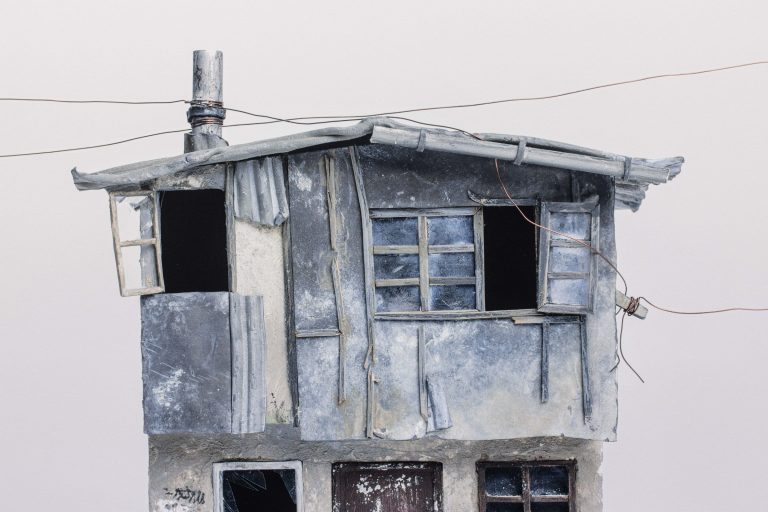 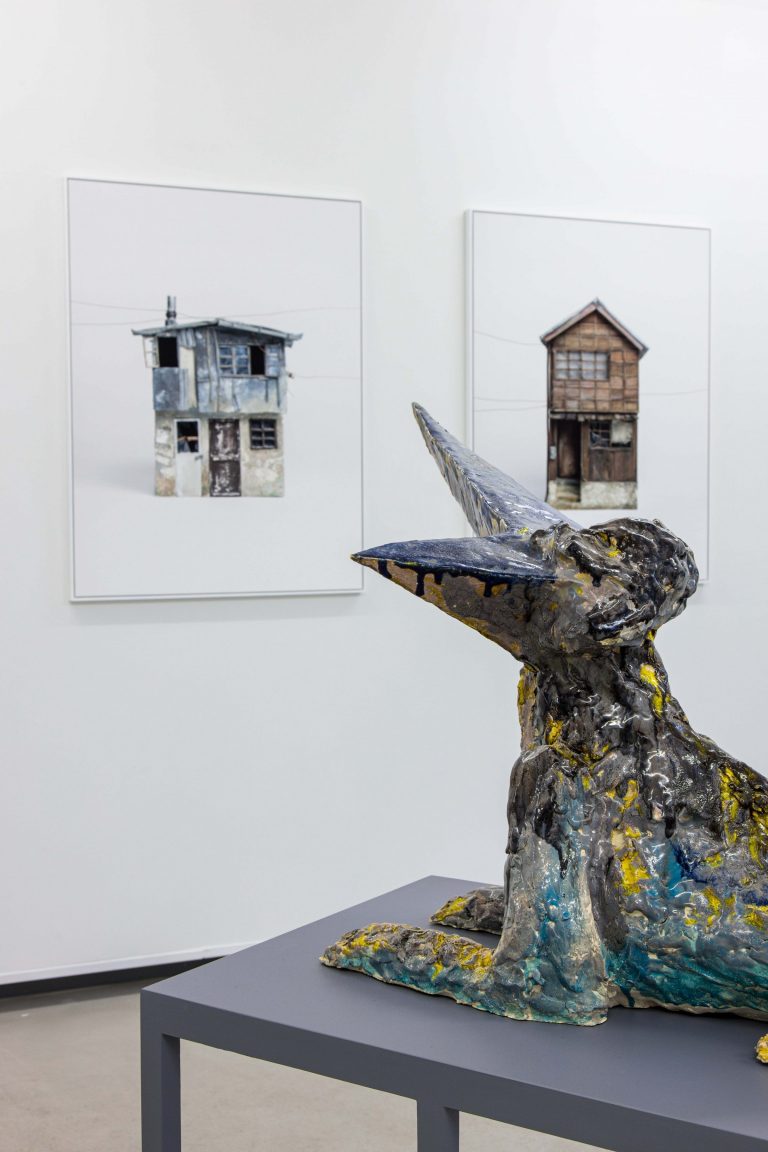 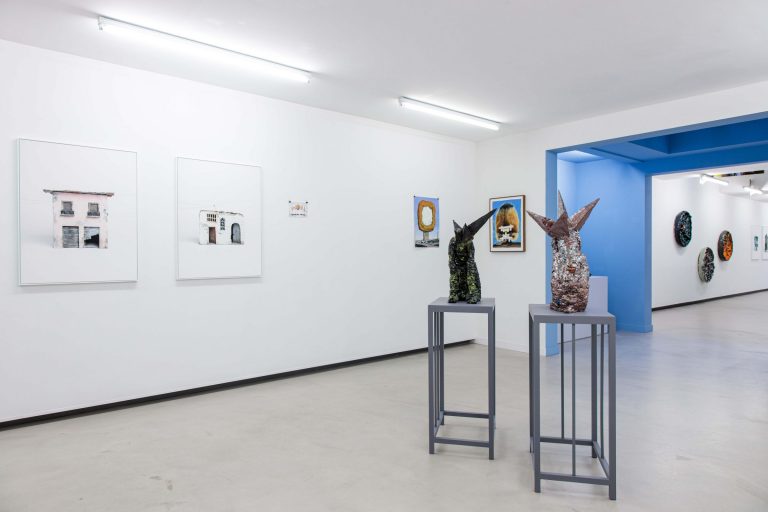 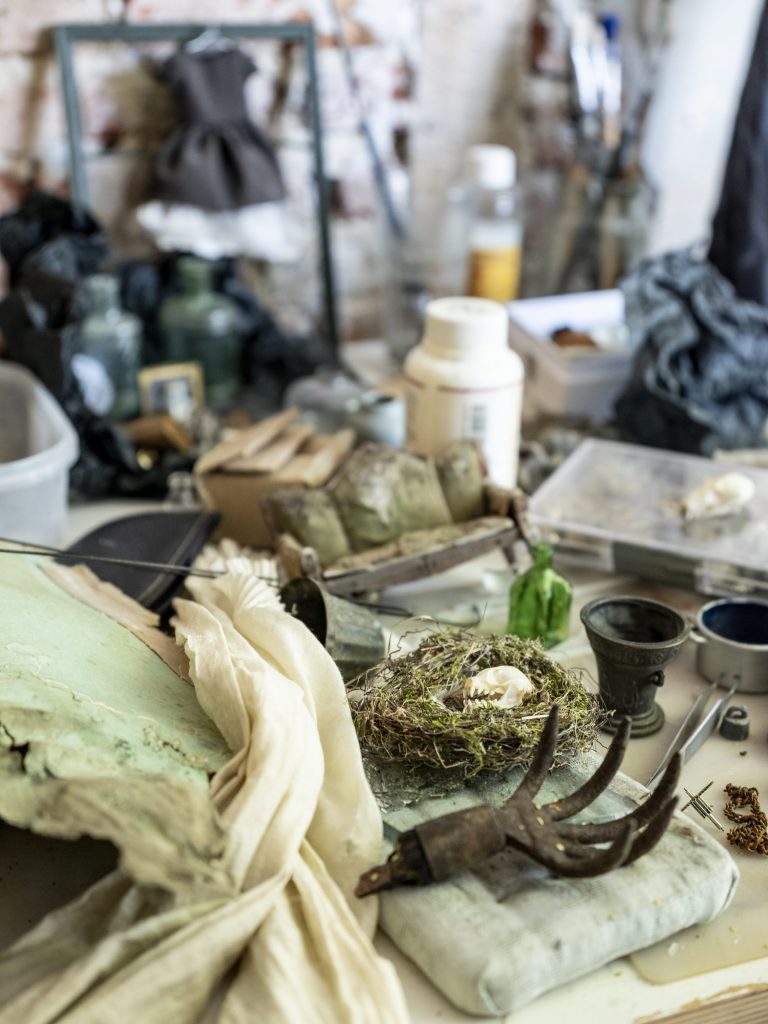 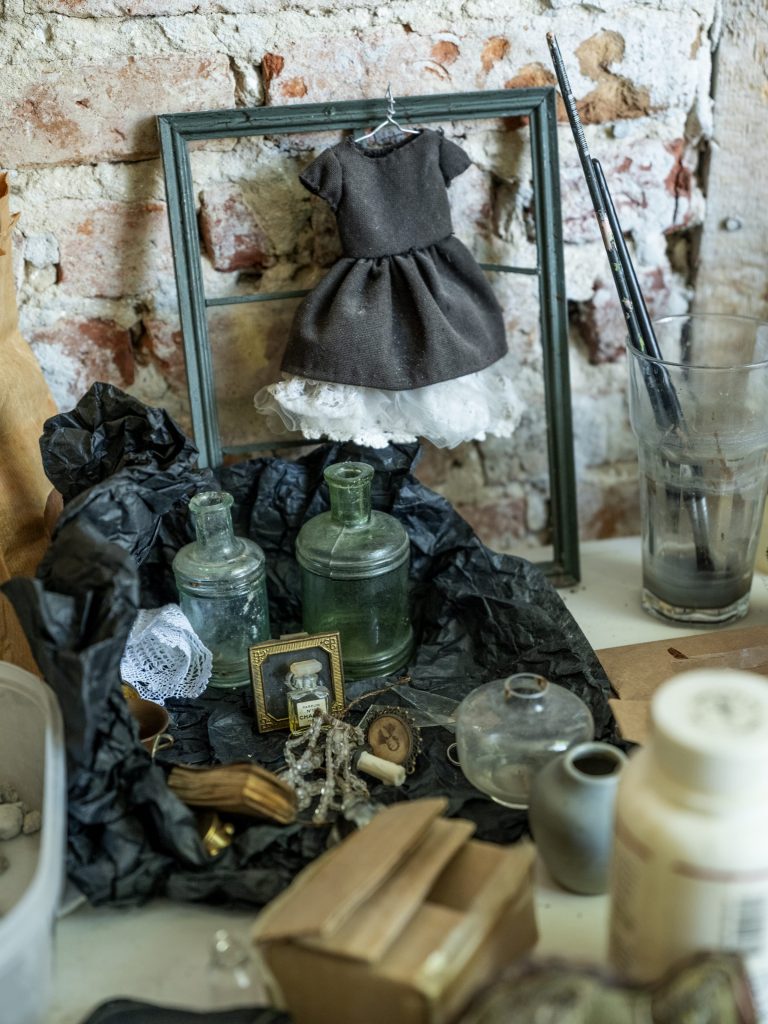 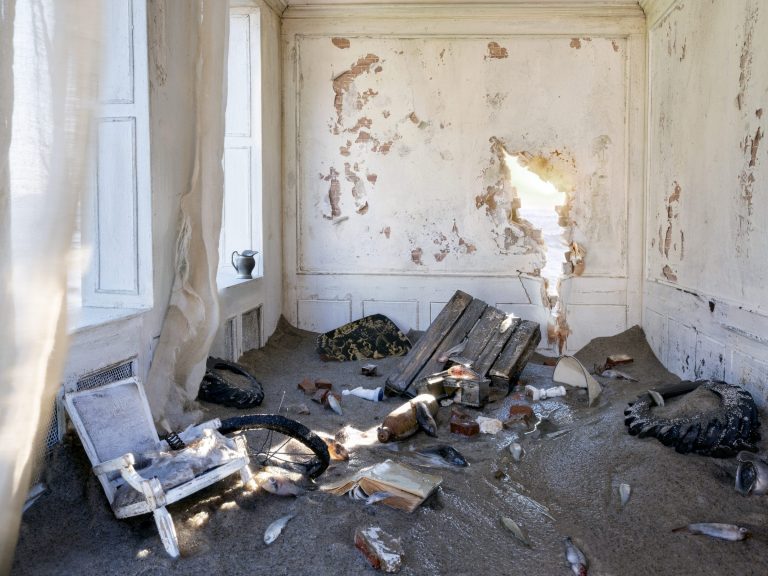 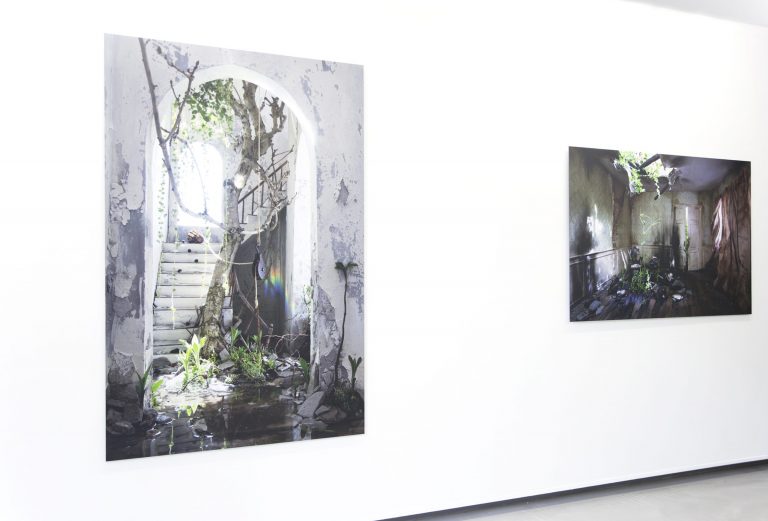 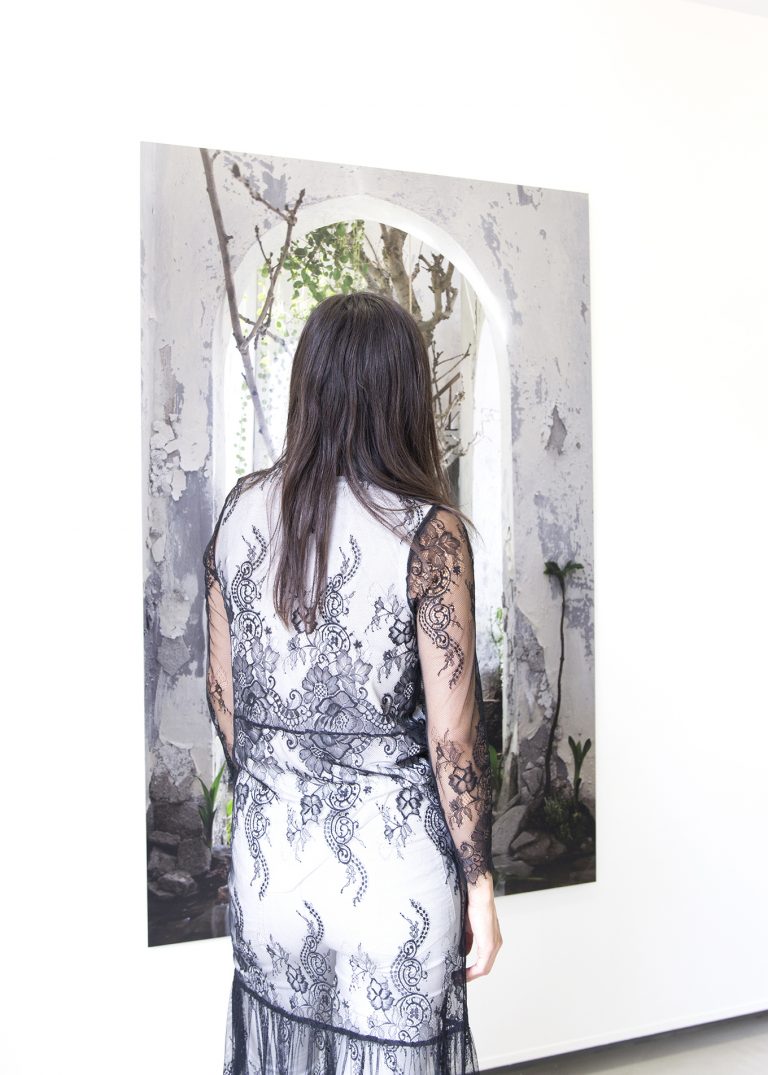 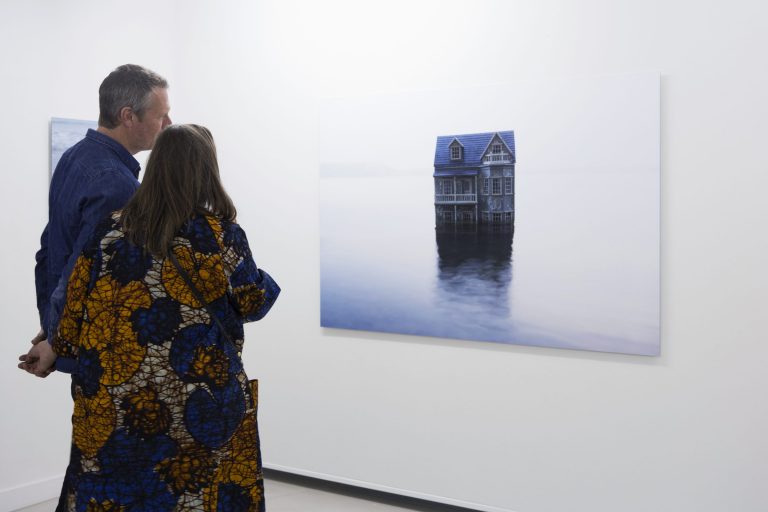 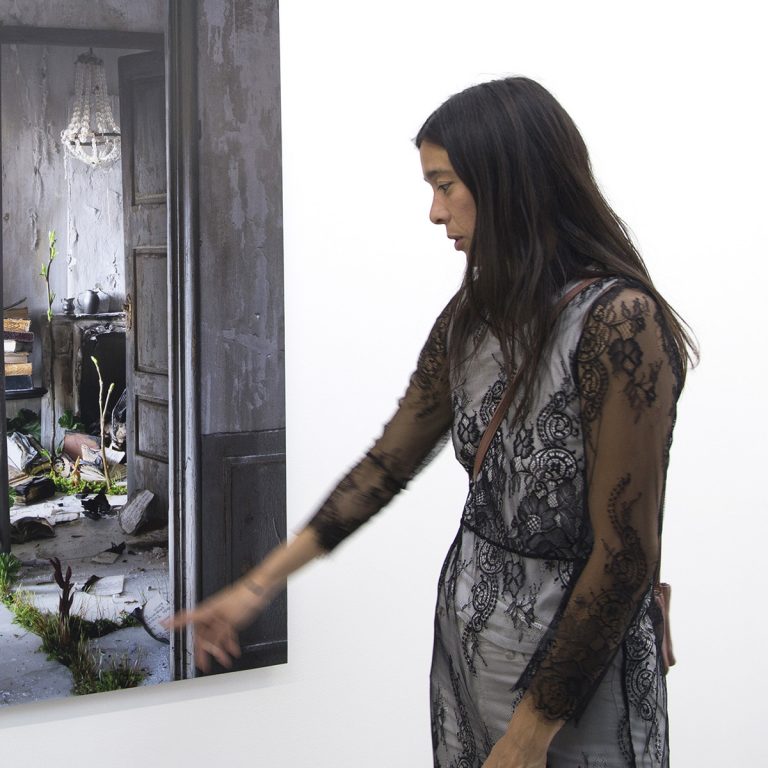 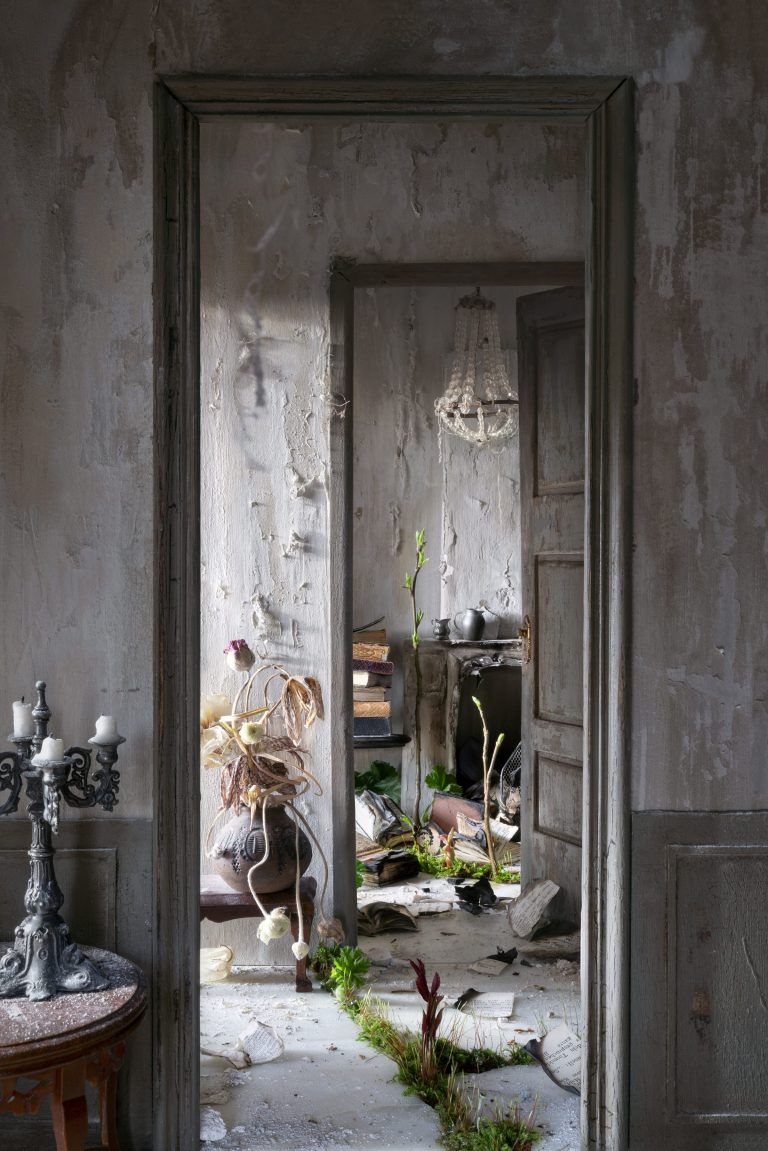 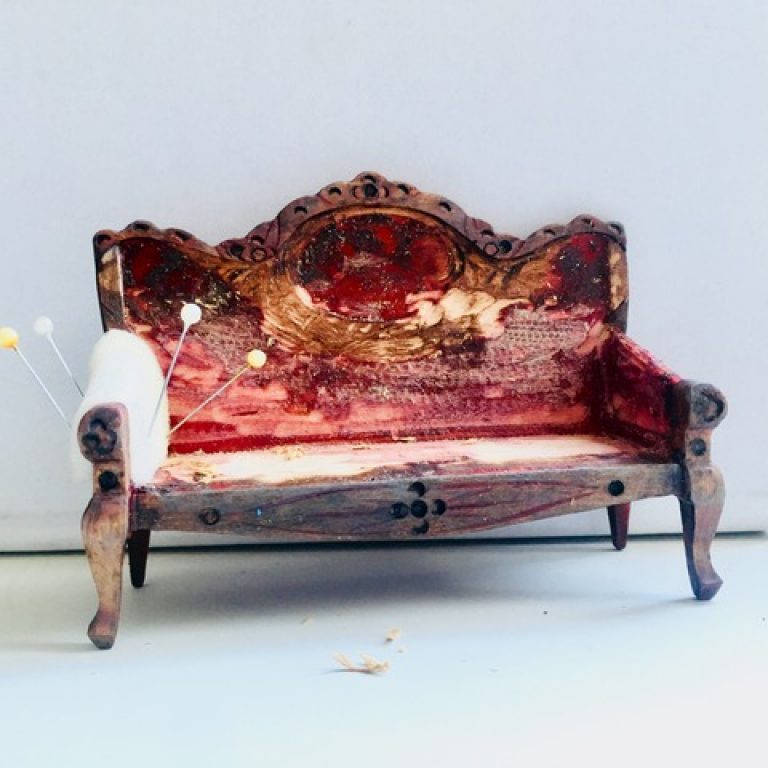 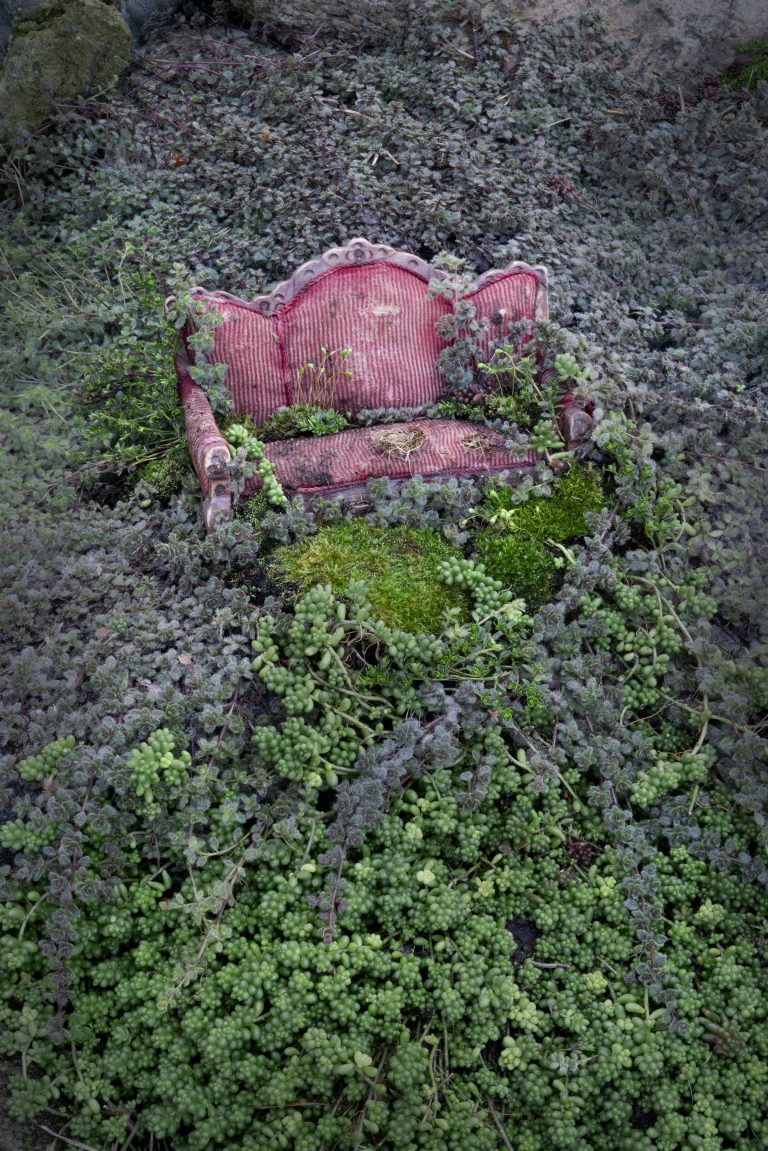 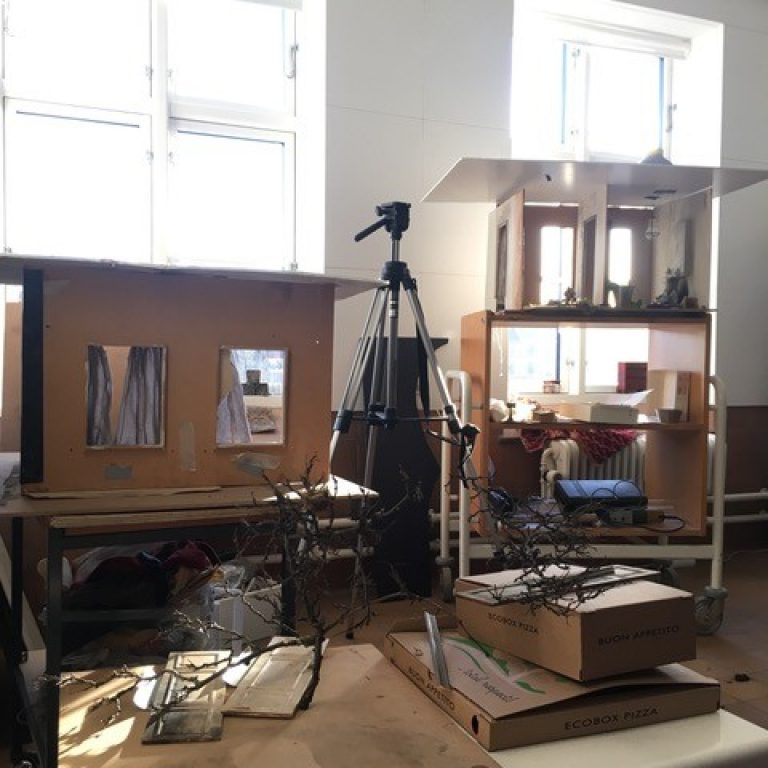 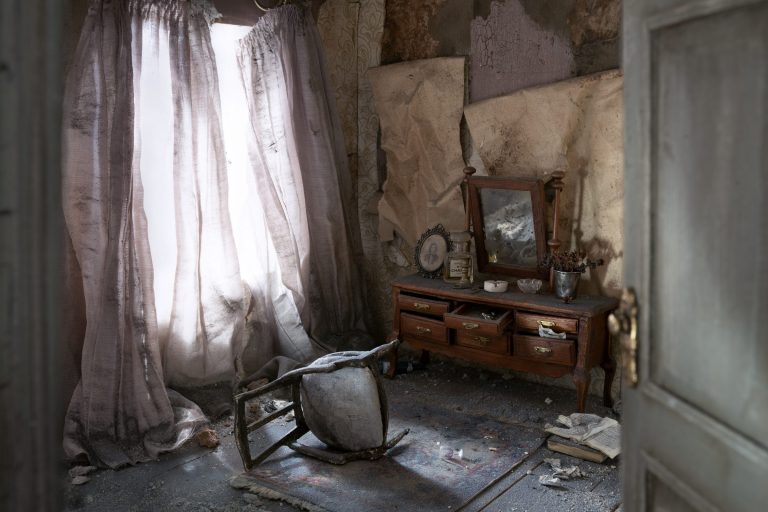 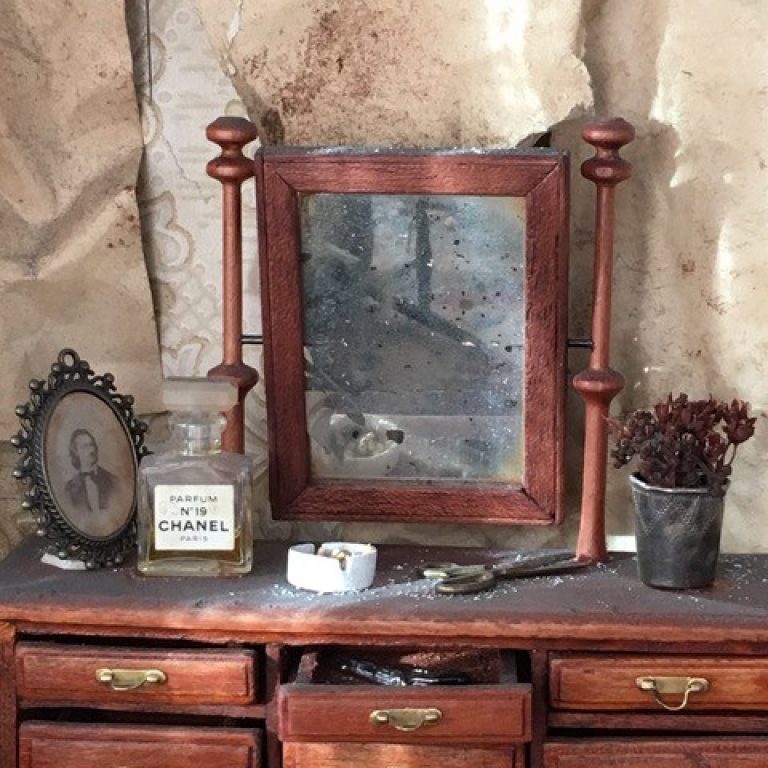 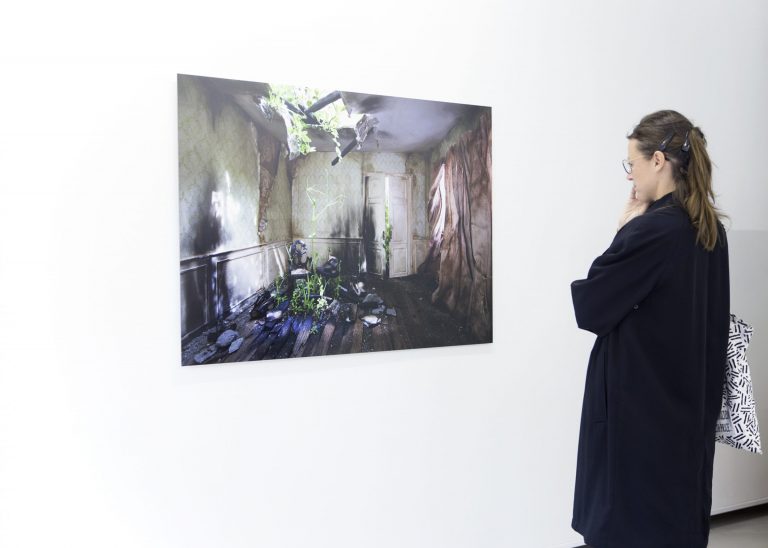 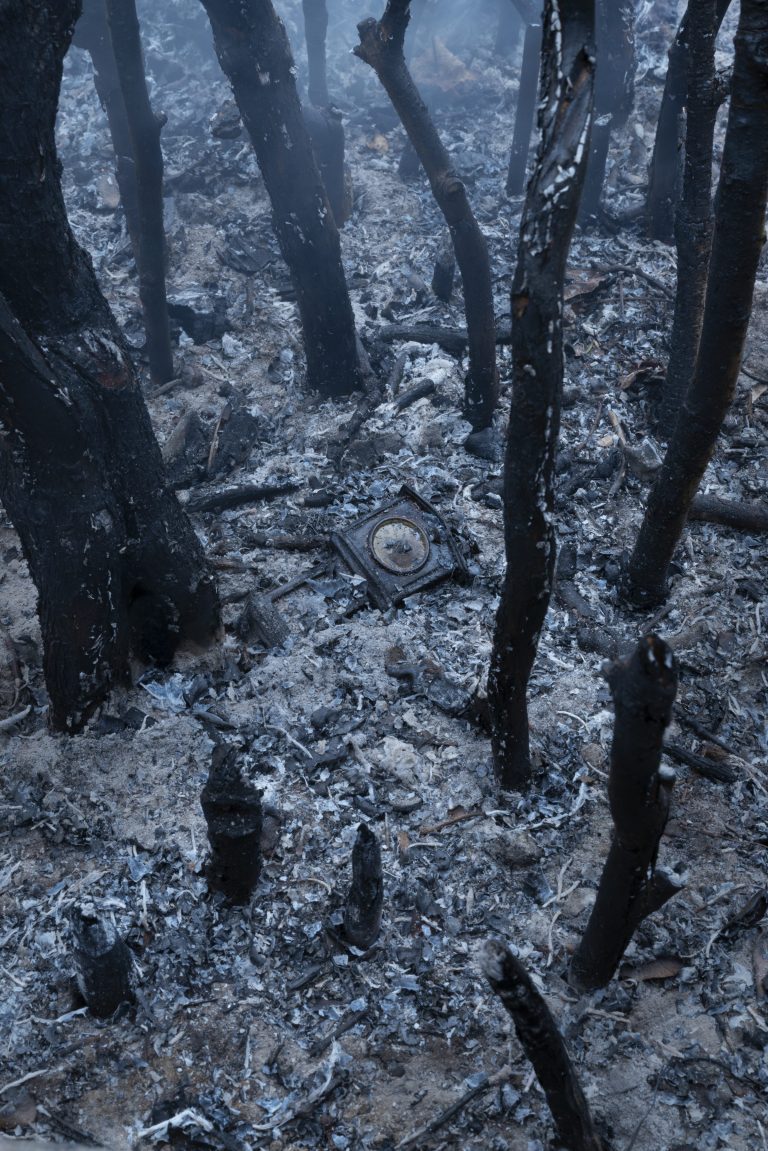 The photographs of artist Choki Lindberg depict the tragedy and beauty of decay. Her empty interiors are void of human presence, yet traces of its inhabitants become visible through the deserted objects decorating these places. Through an open window or a crack in a brick wall, sunlight enters the room and gives a sense of the outside world beyond the frame. Each image has its own narrative, yet none of them are real.

The work is full of detail and fragmented stories. There are traces left behind, and we are invited to investigate and to associate freely. However, once we stop to study the details, an odd dimension surfaces. If one looks closer, it becomes clear that these uninhibited places and forgotten objects never belonged to anyone; these visual representations are all hand-made fabrications of the artist. What at first appears to be authentic, are actually meticulously crafted miniature sets. Built by hand, every object is deliberately placed. The lighting carefully constructed. It is a visual deceit, in a language of its own, that questions reality and our notions of permanence. This only becomes visible through the exaggerated textures of small objects. Looking at Lindberg’s work is like revisiting memory. The amount of detail is limited and can be reconstructed each time one accesses it.

Choki Lindberg, born in 1979, currently lives and works in Copenhagen, Denmark. Choki graduated from the Fatamorgana the Danish School of Art Photography, Copenhagen in 1997, and the International Center of Photography, New York in 1999. In 2006, she got her BFA of at the Gerrit Rietveld Academy in Amsterdam.

Since then, Choki’s work has been exhibited in galleries in Denmark, Germany and The Netherlands. In the striking exhibition Carte Blanche, 2017 at Thottske Palais Copenhagen, the interior inspired her to create a transformation of that space in her artwork, while for her solo Elsewhere in 2019, Bart’s gallery space showcasing her work received an actual transformation. In the same year, Choki’s work was shortlisted as one of the 4 artists for the BBA Photography Prize, as part of the group exhibition at Berlin Blue Art Gallery.

Choki Lindberg’s work includes autonomous art, photography, art direction, stage-, prop- and graphic design. Between 2009 and 2015, she was a lecturer at the Fatamorgana Danish School of Photographic art. Galerie Bart has in 2019 renewed the collaboration with Choki Lindberg, after previously having shown her graduation work in Nijmegen in 2006.