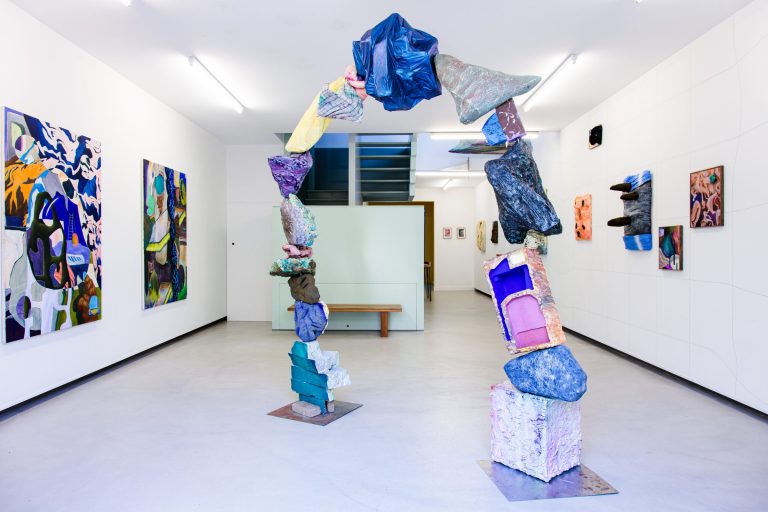 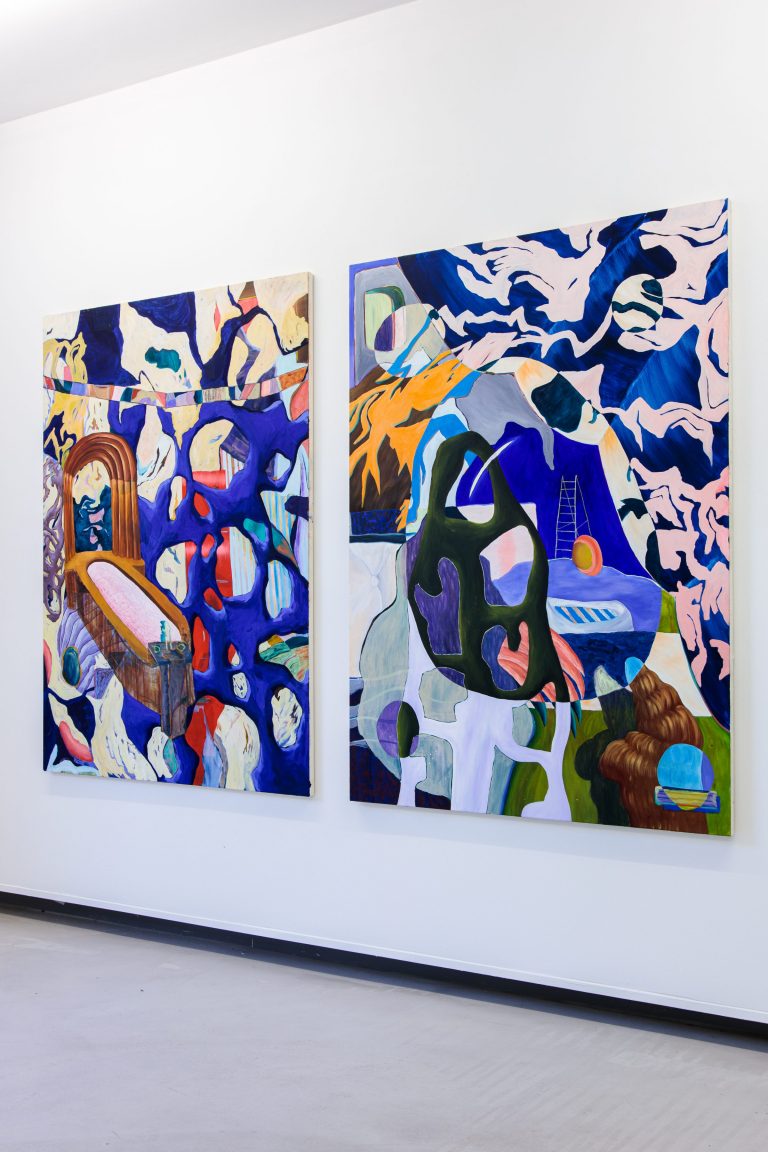 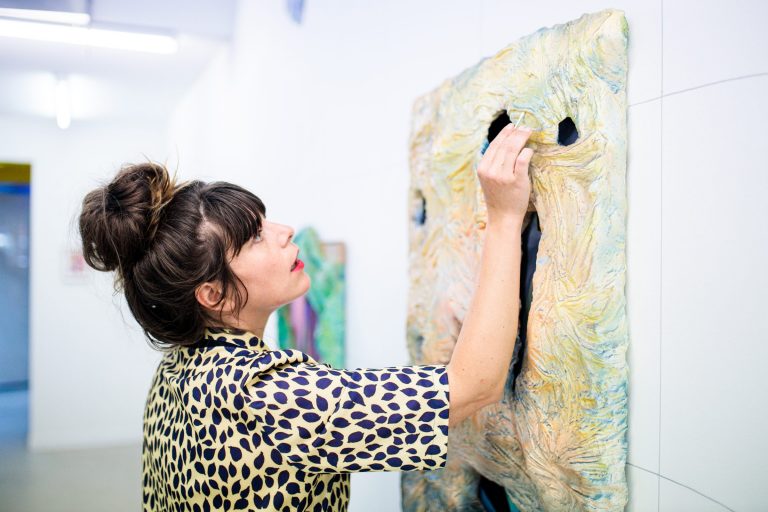 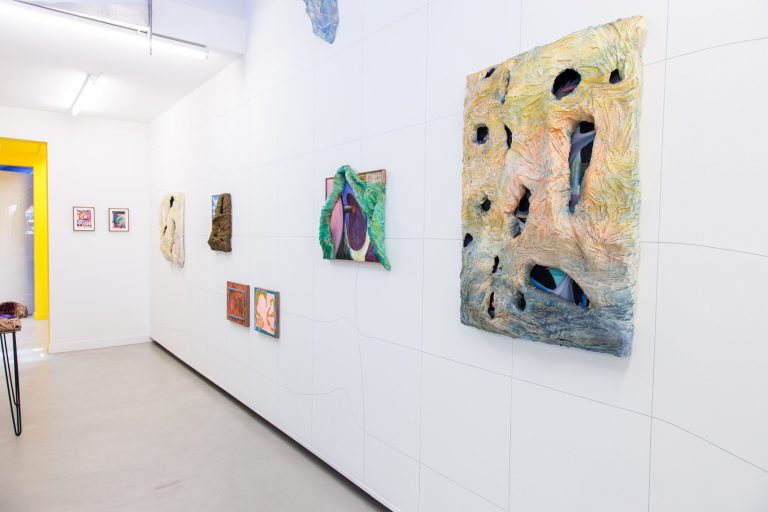 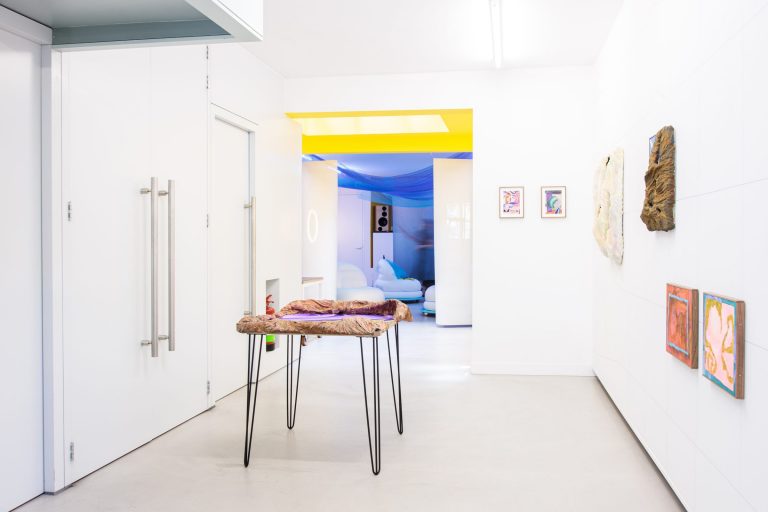 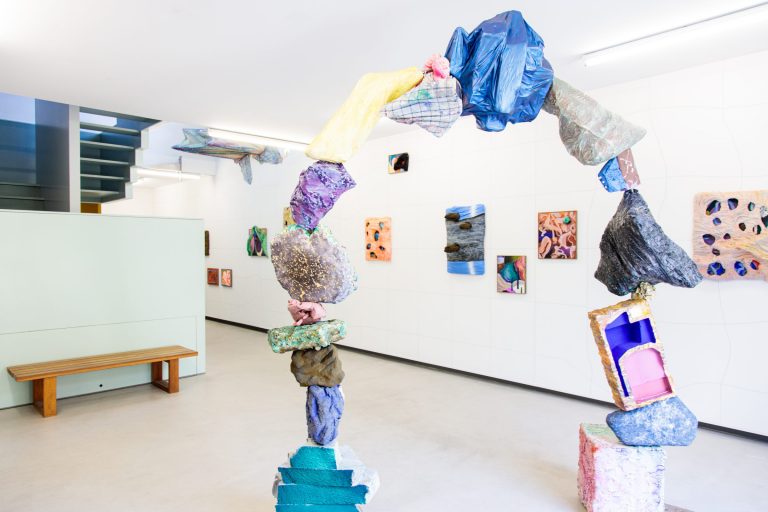 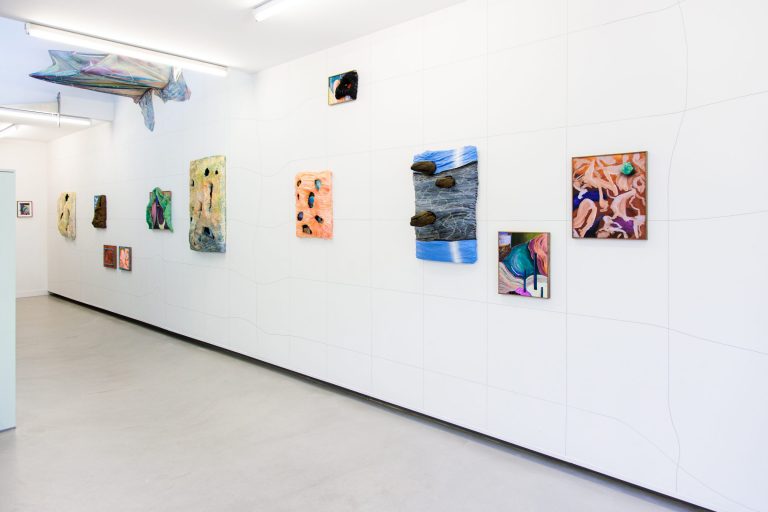 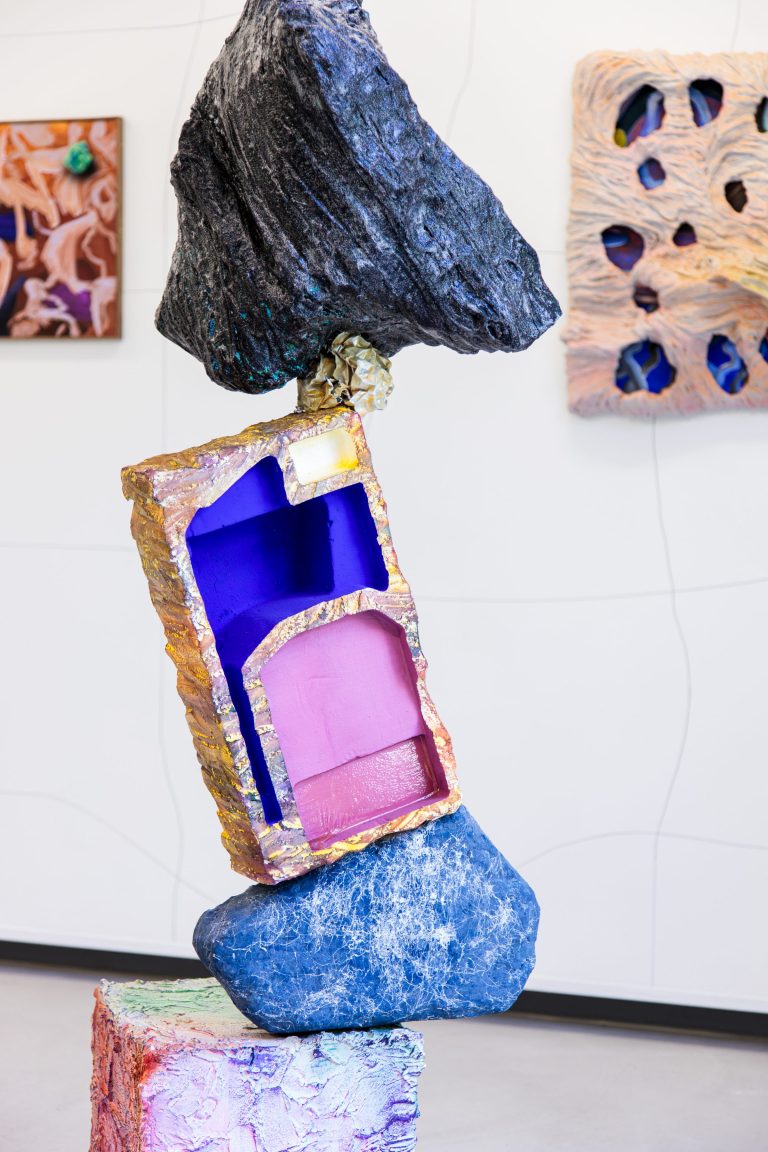 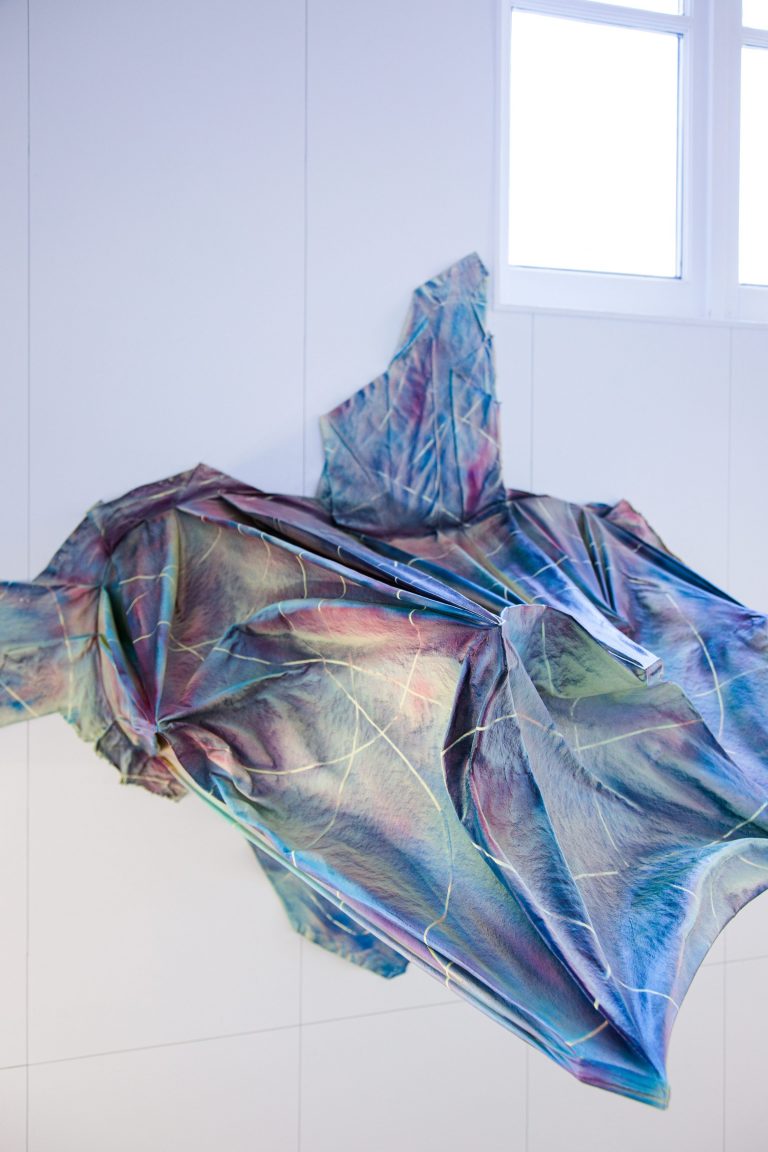 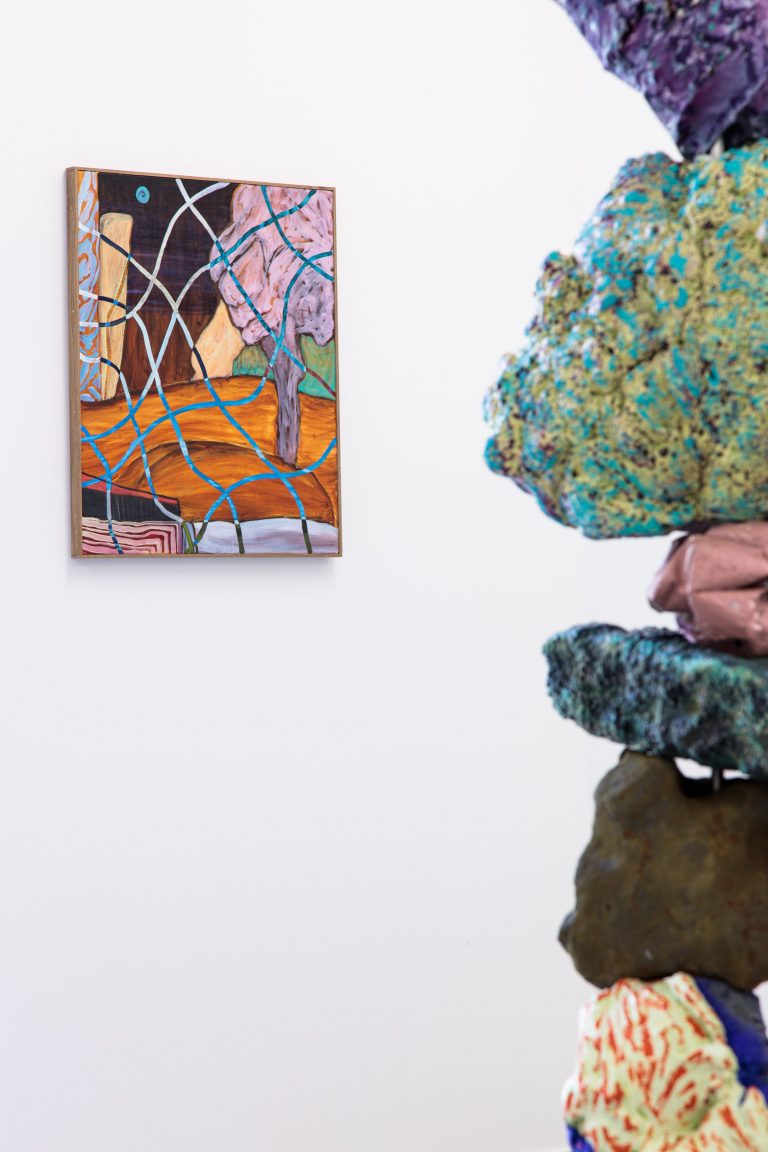 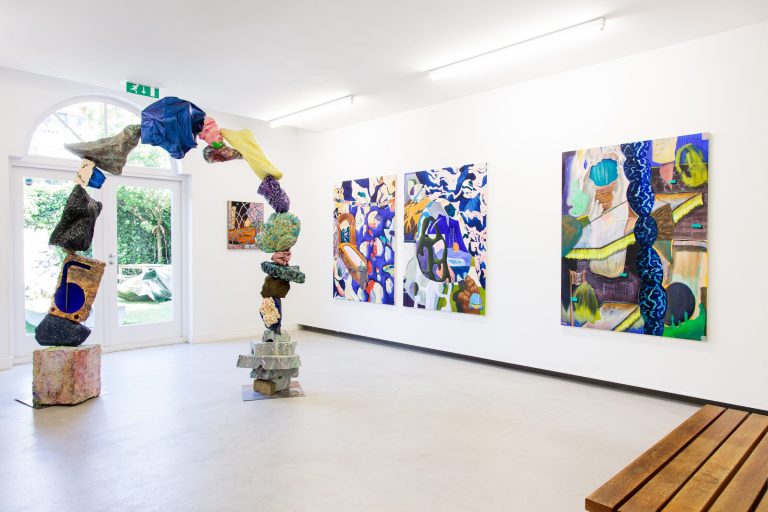 Peering through an opening, carefully stepping over a bump, unexpectedly stumbling and hurtling in free fall into another world. To look at the work of Sanne Maloe Slecht (b. 1987) is to take a visual trip through space and dimensions. Along the way, you pass organic forms that invitingly jut out while blocking the underlying layers from view.

Not only paint, but also clay, papier-mâché, chicken wire and plaster find their way onto the canvas. The pleated forms evoke associations with theatre curtains, which open to reveal and frame the spectacle behind them. Or the lavish imagery of the Baroque, an art movement from the past with which Sanne identifies. But even more, they refer to the – for many people less familiar – field of quantum physics. ‘What would other planets and dimensions look like? My mind can’t go there, but I like to imagine it.’

The idea of parallel universes is staggering. It’s the contemporary equivalent of the romantic views of 19th century artists like Caspar David Friedrich, but now with a natural world that is even vaster, in which man is even more insignificant. ‘That can be scary,’ says Sanne, ‘but actually also quite comforting. If you botch it up here in our dimension, you might have a chance to do it over again somewhere else. In my work, I try to deal with the very biggest questions in a humorous way.’

Play Doh’s Cave will open during the Amsterdam Art Week, where next to many other events, all galleries will have the same opening hours, so you are able to visit many galleries. The ambiance will be festive and you are welcome to join us for a drink. The joint opening hours during this week are:

• At the same time on show in Galerie Bart, are solo exhibition How to See the Sea by Katarina Juricic and garden group exhibition Overflowing Overgrowth.

On Sunday June 20 we invite our visitors to join the artist talk with Sanne Maloe Slecht and Katarina Juričić, both opening their first solo exhibitions at Galerie Bart with the start of the Amsterdam Art Week on June 17. Both artists will reveal their thoughts behind their work and answer questions from the public. The conversation will be moderated by Merel de Kok, director of Galerie Bart.

It’s not quite sexy but it’s gravy

What flavor is that fog?

Check out how wet this egg is!

Return of the Jet eye

This is the way

It had no history to begin with (Arch)